After finishing  A Piece of the World, inspired by Andrew Wyeth’s painting, “Christina’s World” (reviewed earlier this week), I started thinking about novels inspired by paintings. Many favorites came to mind, from Donna Tartt’s The Goldfinch to Tracy Chevalier’s Girl With a Pearl Earring. Ever since I read From the Mixed-Up Files of Mrs. Basil E. Frankweiler, I’ve loved books that take place in the art world. (Today’s children can enjoy Blue Balliett’s wonderful art mysteries, starting with Chasing Vermeer, and Marianne Malone’s Sixty-Eight Rooms series, set in one of the most enchanting places I know — the Thorne Miniature Rooms in the Art Institute of Chicago.) 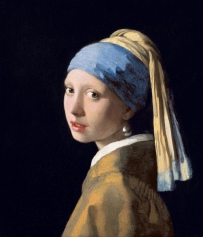 In a TED talk called “Finding the Story Inside the Painting”  , Chevalier describes the affliction of “gallery fatigue” that many museumgoers experience when overwhelmed by galleries full of dazzling art. Her solution is to be selective and to concentrate on one painting:

When I go into a gallery, first of all, I go quite fast, and I look at everything, and I pinpoint the ones that make me slow down for some reason or other. I don’t even know why they make me slow down, but something pulls me like a magnet and then I ignore all the others, and I just go to that painting. So it’s the first thing I do is, I do my own curation. I choose a painting. It might just be one painting in 50. And then the second thing I do is I stand in front of that painting, and I tell myself a story about it.

Chevalier found inspiration in art for two of her other novels — Burning Bright (the paintings and poetry of William Blake) and The Lady and the Unicorn (the medieval tapestries hanging in the Cluny Museum in Paris). So have many other authors — here are a few of my favorites: 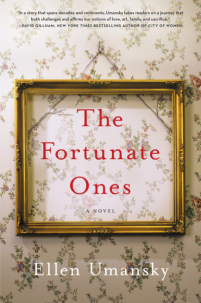 The Fortunate Ones by Ellen Umansky
The boy in the painting was not pretty. He was too skinny in his red uniform, his face pasty and elongated. The paint was thick, thrown on; it looked as if the painter couldn’t be bothered to slow down and pay attention. Rose didn’t understand why her mother loved it so.
Rose Zimmer’s parents save her life by sending her on a Kindertransport from Austria to England in 1939. After the war, she desperately searches for her family’s Chaim Soutine painting, stolen by the Nazis. The search leads her to Lizzie Goldstein, whose father was the last owner of the painting — which has been stolen again, on Lizzie’s watch.

The Goldfinch by Donna Tartt (winner of the Pulitzer Prize in 2014)
. . .  If a painting really works down in your heart and changes the way you see, and think, and feel, you don’t think, ‘oh, I love this picture because it’s universal.’ ‘I love this painting because it speaks to all mankind.’ That’s not the reason anyone loves a piece of art. It’s a secret whisper from an alleyway. Psst, you. Hey kid. Yes you.
I know it’s probably longer than it should be, but if you haven’t read The Goldfinch , which is all about the enduring power of art, you’re missing out on a real treasure. For a complete list (with illustrations) of the many paintings referred to in The Goldfinch, check out Beyond the Bird: Art in The Goldfinch.

I Am Madame X by Gioia Diliberto
I had thought photography could reflect the truth of a woman’s beauty. But after seeing these horrible prints, I decided it was an imperfect art, impossible for the photographer and sitter to control. Painting, on the other hand, I began to believe, could reveal something greater than reality. In the right hands with the right chemistry between artist and sitter, painting could illuminate a higher truth. More to the point, it had the power to immortalize.
John Singer Sargent’s portrait of American beauty Virginie Gautreau shocked audiences at the 1884 Paris Salon, damaging the reputations of both artist and subject.

Girl in Hyacinth Blue by Susan Vreeland
She thought of all the people in all the paintings she had seen that day, not just Father’s, in all the paintings of the world, in fact. Their eyes, the particular turn of a head, their loneliness or suffering or grief was borrowed by an artist to be seen by other people throughout the years who would never see them face to face. People who would be that close to her, she thought, a matter of a few arms’ lengths, looking, looking, and they would never know her.
Based on a fictional painting by Vermeer, Vreeland’s novel moves through several centuries as the painting passes from owner to owner. Vreeland has built her career on fiction set in the world of art — Lisette’s List (Chagall), The Passion of Artemisia (Artemisia Gentileschi), Clara and Mr. Tiffany (Louis Tiffany), Luncheon of the Boating Party (Renoir) . . .

The Painted Girls by Cathy Marie Buchanan
We are the daughters of sewing maids and fruit peddlers, charwomen and laundresses, dressed up and painted to look like something we are not. All the years of practicing, the sweat and toil, the muscles aching at the end of the day, it comes down to learning trickery—to leap with the lightness that lets the theatergoers think of us as queens of the Opéra stage instead of scamps with cracking knees and heaving ribs and ever-bleeding toes.
Buchanan imagines the lives of ballet dancer Marie van Goethem, the model for Edgar Degas’ sculpture, “Little Dancer, Aged Fourteen”, and her sisters.

The Art Forger by B.A. Shapiro
Without light nothing can be seen. And with it, still so much is unobserved.
In 1990, thirteen paintings and drawings were stolen from the Isabella Stewart Gardner Museum in Boston.  The crime has never been solved, and if you visit the museum today, you’ll see blank spaces on the walls where the works of art should hang. In Shapiro’s entertaining and enlightening novel, one of the paintings apparently resurfaces.

One Willy H. Smith, commenter on the Washington Post‘s book blog, is not a fan of novels based on paintings:

This is a terrible trend. You can’t see the paintings in the National Gallery for all the novelists trying to find a source for their next romance novel. You’d think the review somewhere would mention that this has been done to death. And speaking of death, I think I’ll write a lad’s adventure story about the guys who are getting shot in Goya’s “The Third of May”. Anybody got any purple prose to spare?

I think maybe Willy hasn’t read the female-written “romance” novels he disparages. The only purple prose I’ve encountered in an art-related novel can be found in a novel written by a man — Dan Brown’s The Da Vinci Code. 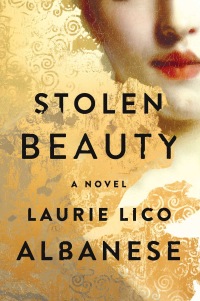 I’ve just started reading Stolen Beauty by Laurie Lico Albanese, about Gustav Klimt and Adele Bloch-Bauer, the “woman in gold” who is the subject of two of his most famous paintings. So far, so good — and my husband highly recommends Anne-Marie O’Connor’s nonfiction account, The Lady in Gold: The Extraordinary Tale of Gustav Klimt’s Masterpiece, Portrait of Adele Bloch-Bauer.

An exhibit based on “Whistler’s Mother” has just opened at  the Art Institute of Chicago. Whistler actually titled the portrait “Arrangement in Grey and Black” and said, “Now that is what it is. To me it is interesting as a picture of my mother; but what can or ought the public to care about the identity of the portrait?” I’m willing to bet there’s a story in there . . .

16 thoughts on “Novels for Art Lovers”