The christening party took a turn when Albert Cousins arrived with gin.
The opening line of Commonwealth

Bert Cousins can’t bear to stay home with his pregnant wife and three children, so he crashes Franny Keating’s christening party, where he kisses Franny’s beautiful mother, Beverly — and causes the breakup of two families. Ann Patchett’s novel covers fifty years in the lives of the Keating and Cousins families, beginning and ending with a party scene. Commonwealth is structured as a series of nine linked stories, each supplying bits and pieces of the Keating and Cousins families’ complicated history, but ultimately centering on Franny — who as a young woman “had no skills and no idea what she wanted to do with her life other than read”. Is it a coincidence, I wonder, that Franny shares a name with J.D. Salinger’s Franny, a college dropout and spiritual seeker?

Franny’s father, a police officer, and her stepfather, a district attorney, agree on almost nothing, but they do agree on one thing: that Franny and her sister Caroline should go to law school. When Franny is ten, her father sends her an LSAT study guide:

Franny . . . was just now opening the hardback copy of A Tree Grows in Brooklyn from her grandmother. Even from the first sentence, from the look of the words on the page, she could tell that that was what she would be reading over Christmas vacation, not an LSAT prep book.

Is it any surprise that Franny drops out of law school, works as a cocktail waitress, and becomes romantically involved with a self-important novelist, Leo Posen?  Posen writes a bestselling novel titled Commonwealth (which is made into a movie) about the trials and tribulations of the Keating-Cousins blended family. When Albie, Franny’s stepbrother, is working as a bike messenger for a publishing house in New York, the receptionist gives him a copy of Commonwealth. He sees a version of his family’s truth in print and although “he loved the book before he knew what it was about”, he is horrified by what he sees as the theft of his family’s story.

But I’m getting ahead of myself. I’m not going to say much more about Commonwealth‘s plot, except that you will be a little confused at the beginning. For example, the first chapter ends with the infant Franny asleep in her father’s arms, and the second chapter opens with the adult Franny taking her father to chemotherapy. Have faith that eventually you will remember which children belong to which family and that all the little snippets come together to form a satisfying, if messy, whole.

I found it frustrating to learn so little about some of the characters in this book. Quite a few of them make cameo appearances and then reappear several chapters later, leaving the reader wanting to know more about what happened to them in the meantime. In an interview with the Guardian, Patchett said that each character represents one of her own family members. She says that she, her sister, and their stepsiblings “weren’t the products of our parents’ happy marriages: we were the flotsam of their divorces”.

Patchett told the Guardian that all of her novels (starting with her first, The Patron Saint of Liars, about a home for unwed mothers) basically tell the same story: “a group of people are thrown together and must forge connections to survive. ‘I’ve been writing the same book my whole life – that you’re in one family, and all of a sudden, you’re in another family and it’s not your choice and you can’t get out.'” She said that nothing has scared her more than writing a novel based on her own family: “I would happily ride down the Amazon in a canoe and deal with snakes [as she did to research State of Wonder] rather than face my family.” But, as she told Lithub, she received her mother’s blessing, who commented, “None of it happened and all of it’s true.”

What happens to the six Keating and Cousins children in Commonwealth is shocking, sad, and sometimes, very funny. Patchett’s humor and wit really shine in this novel, more so than in any of her others. The scenes in Amagansett, where Franny is helping Leo entertain his literary colleagues, made me laugh out loud. And the scenes that take place during the children’s summers in Virginia are suffused with dark humor. Today’s so-called “helicopter parents” would be aghast at the lack of supervision, as the children “wandered out of the civilized world and into the early orphanage scenes of Oliver Twist“. The children, who squabble incessantly, “held in common one overarching principle that cast their potential dislike for one another down to the bottom of the minor leagues: they disliked the parents. They hated them.” Left to their own devices, the children “did things, real things, and they never got caught.”

Well, actually, they do get caught, or perhaps it’s their neglectful parents who are caught. During one of those chaotic summers, something happens that will affect everyone in the family for the rest of their lives. “‘Your guilt’s got nothing on my guilt,'” Franny tells Caroline. “‘Your guilt isn’t even in the ballpark.'”

Guilt and shared secrets may bind the Keating and Cousins children together, but so does love. Thrown together against their will as children, as adults they choose to love each other and forgive their parents. “If her mother wasn’t so pretty none of it would have happened, but being pretty was nothing to blame her for,” Franny thinks.

Ann Patchett is one of my most loved authors, as well as a personal heroine for her involvement in independent bookselling. I enjoyed Commonwealth very much, and particularly admire its structure and multiple viewpoints. That said, it’s not my favorite of her novels — I think Bel Canto and State of Wonder would tie for first place. They are both unlike anything else I’ve read, while Commonwealth reminds me of the work of other very accomplished contemporary authors who write about family relationships– Jane Hamilton, Ann Packer, Anne Tyler, Jane Smiley. I do highly recommend Commonwealth, and I think it would be a great book club choice. (If you have one of those book clubs that serves “theme” food and drinks, this one’s easy — all you need is a bottle of gin.) 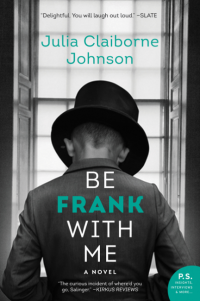 If I’m planning on reviewing a book, I try not to read any reviews until after I’ve posted my own thoughts. Not only do I find that many reviewers include too much information about the plot, I don’t want their opinions or language to influence mine. You would think that it’s possible to ignore what others have said about a book, but I find that words and phrases from other reviews burrow into my mind.

And that’s what happened with Be Frank With Me, Julia Claiborne Johnson’s debut novel — out in paperback today. When the book was published last winter, reviews popped up everywhere, and I gave in and read quite a few of them. Almost every one used the same adjectives to describe Be Frank With Me: charming, witty, original, and poignant . . . which are exactly the same ones I’d use to describe this book, which also possesses a rare quality : it’s not depressing. Anyone who reads this blog on a regular basis knows that while I relish “depressing” books, I’ve found that many readers are constantly, and often in vain, searching for books that are uplifting, but still have some substance. This is the book for them, and for anyone who enjoys a smart, funny novel with quirky characters.

Frank Banning is a nine-year-old boy who’s somewhere on the autism spectrum, brilliant, and obsessed with classic movies: “Pinocchio, the eponymous Academy Award-winning film released in 1940 by the Walt Disney Studios, s one of my favorite animated movies.” His mother, M.M. (Mimi) Banning, wrote Pitched, a Pulitzer and National Book Award-winning masterpiece, when she was a teenager but hasn’t published another novel since. Having lost her fortune and facing losing the copyright to her book, Mimi is under the gun to write a new novel, since “good, bad, or indifferent, it would be a best-seller.”

Along with a large advance, Mimi demands that her publisher send an assistant to her Los Angeles home (which is, significantly, made of glass) to help manage all aspects of her life while she finishes the book. Mimi, who is cantankerous, to say the least, requires that her assistant possess these qualifications:

Enter the narrator, twenty-four-year-old Alice Whitley, private school math teacher and computer store employee, who thinks she’s been hired to keep Mimi on track and email drafts of her novel to her publisher in New York, but soon learns that she’s not an editorial assistant, but a companion to a brilliant and lonely little boy with special needs. In a way, the novel turns out to be a coming-of-age story about Alice, who is wiser and more perceptive than she knows.

Much of what happens in Be Frank With Me is implausible; to begin with, would a publisher really send an assistant (with no editorial experience) to live with a reclusive, has-been author? To enjoy this book, readers must suspend disbelief and go along for the ride — and it’s a very entertaining ride, full of surprises. The book is worth reading just for Frank — he’s a one-of-a-kind, and a completely believable. Learning that Alice is twenty-four, Frank comments:

Dr. Abrams says that’s when the prefrontal cortex usually finishes developing. That’s the part of your brain that controls impulsivity. According to her forecast, by the time I’m twenty-five I’ll be old enough to know better. If we’re lucky. It might happen later, when I’m thirty. Or never. Some people’s prefrontal cortexes mature earlier than others. Women’s, mostly. Debbie Reynolds was a teenager when she made Singin’ in the Rain, for example.

Johnson says that Frank’s character was inspired in part by To Kill a Mockingbird‘s Boo Radley. After rereading To Kill a Mockingbird when her daughter was assigned to read it at school, Johnson, who’d been a writer most of her life but had never written a novel, came up with the idea of a novel “about a writer, one, who’d written about an oddball kid and then ended up having one of her own.” It’s a peculiar coincidence that Go Set a Watchman was published in 2015, when Johnson had already finished her book about a famous author writing her second novel.

Fans of The Curious Incident of the Dog in the Night-Time, Where’d You Go, Bernadette, and The Rosie Project will enjoy Be Frank With Me . . . as will film buffs. The paperback version, sent to me by HarperCollins, includes a seven-page Be Frank With Me “Guide to Film Viewing.”