She could swear that an enthralled reader nineteen years old is the most beautiful animal on earth — at least, she’s seen one or two who were, in their spellbound moment, the incarnation of extremest human beauty. They were not themselves. Literature looked back at her from their eyes and told her certain things she was sure they ought not to have understood at their age.

Heidi Pitlor, series editor of The Best American Short Stories, estimates she reads between 3,500 and 4,500 stories a year — yet even she cannot explain exactly what makes short story succeed. “It’s easier, in the end, to say what doesn’t work than to pinpoint exactly what does, as a successful short story does not expose its mechanics”, she says in an article entitled “What Makes a Good Short Story‘, adding that “a good story tells you something interesting about someone. Things happen in a good story. People reveal who they are.”

The stories in Elizabeth Tallent’s brilliant collection, Mendocino Fire, unveil the inner lives of a diverse cast of characters. The stories are peopled with men and women who face turning points in their relationships with others and emotional crises within themselves. The twenty-something son of a fisherman comes to term with his father’s rejection (“The Wrong Son”); an aging political activist blames a scavenged Persian rug for the demise of his hasty marriage (“Tabriz’); a wronged woman drives across the country to track down her ex-husband and his new wife, with surprising repercussions (“Nobody You Know”); a working-class couple pressure their teenage son into a shotgun marriage and become entwined with his troubled wife (“Never Come Back”); a young woman embarks on an impulsive affair with a famous writer (“Narrator”). These five stories, and the five more that comprise Mendocino Fire, exemplify short story writing at its best.

As every writing instructor I’ve ever had has emphasized, short stories depend on scenes. Pitlor emphasizes the importance of scenes:

Sometimes, story writers seem to forget to write scenes . . . Too often, we as readers enter a story via a small action (a door opening, a phone ringing) and then are held captive while the author utilizes a disproportionate amount of space introducing a character, his marriage, his children, his divorce, his parents and his emotional limitations before we return to the room he just entered or the phone call that just begun. In a 17-page story, each page matters. Each sentence matters. Pacing matters.

With one exception, the stories in Mendocino Fire are built on scenes. In “Narrator”, the protagonist describes the first hours she spent with her soon-to-be lover — a writer who understands very well the importance of detail:

We spent the night over coffee in a cafe on Telegraph Avenue, breaking story-length pieces off from our lives, making a slice of torte disappear in alternating forkfuls. Our waitress’s forgetfulness he explained as distraction: she had a sick child at home. How can you tell? Unicorn stamp on her left hand. How a local pediatrician commemorates non-crying visits.

Tallent, who has been an English professor at Stanford since 1994, is the author of three previous short story collections (In Constant Flight, Time with Children, and Honey), along with a novel (Museum Pieces) and a work of critical analysis (Married Men and Magic Tricks: John Updike’s Erotic Heroes). When Time with Children was published in 1987, the New York Times review commented that “Like John Updike . . . Ms. Tallent is interested in the ways in which the institution of marriage affects our contradictory yearnings for freedom and safety, independence and domesticity.” And like Updike, Tallent constructs beautiful sentences — some very short, some almost a full page in length. One sentence, in particular from “Briar Switch”, a story about a woman facing the impending death of her estranged father (and fittingly, the final story in the collection) is really a prose poem. Both physical and emotional coldness figure into “Briar Switch”, as this sentence excerpt illustrates:

At the other end of the closet is her father’s overcoat, and it stops her, his overcoat simply hanging there, not an overcoat she has any special associations with except that by virtue of being his it evokes the first overcoat she knew him in, no cold like the winter cold borne in with her father’s overcoat, coldest in its folds, but also, all over, distinctly cold, and as if the cryptic eyes your father turns on you were not mystery enough, this ghostly cold comes as a sly erotic assault, a little squall for your child’s senses when that coat shrugs its way down to you . .

Talent’s stories have been published in many magazines and anthologies (The New Yorker, Esquire, Harper’s,The Paris Review, The Best of Tin House, The PEN/O.Henry Prize Stories, and The Best American Short Stories) and have received many awards. Pitlor selected my favorite  story in Mendocino Fire, “The Wilderness”, for the 2013 edition of The Best American Short Stories.  This story breaks the rules — it’s a “sceneless” (to use Pitlor’s word) meditation. The story begins with an English professor contemplating her students’ dependence on electronic devices and their desire for constant connectivity, and ends with the professor ruminating on her great-great-grandfather’s experiences as a Civil War soldier in the Battle of the Wilderness and her own need for connection — with him and with other people. It’s a beautiful, poetic story that demands to be read again and again. The professor recalls a childhood visit to a museum, when she encountered mummies and “for the first time comprehended death”:

Her heart has always been the same size as it was that long-ago Sunday when she first saw those eyes pointed at both ends, and she has always felt the same to herself. Secretly, because people are supposed to go through enormous changes, to mature, she wonders if there is something wrong with her, to feel such consistency between who she is now and who she was then when she looked down into those alive-dead eyes.

The professor, like Tallent’s other characters —  Finn, the tree-sitter in “Mendocino Fire”; Clio in “Eros 101”;  the ex-wife in “Mystery Caller” — wants what we all want: intimate connection with other people, to know and be known. That universal longing links the ten stories of Mendocino Fire. The collection is Tallent’s first book in 20 years, but fortunately we won’t have to wait that long for her next book — she has a memoir,  Perfectionism, due for publication in 2016.

ME: What can I help you find this afternoon?

CUSTOMER: Well . . . I’m just looking for something good to read. Anything you’ve read lately you would recommend?

ME: Oh, yes! I really enjoyed Astray by Emma O’Donoghue. She wrote Room.  It’s a collection of short stories, and I thought just about every story was wonderful.

CUSTOMER: Uh-huh . . . I wasn’t really looking for short stories. Anything else?

And booksellers aren’t the only ones who have trouble convincing people to read short stories. Author David Abrams has the same problem, as he notes in the website Book Riot:

I’ve always been a champion of the short story, both as a writer and a reader, and it always stuns me into silence when I have friends–good friends, well-read, intelligent, reasonable friends–who dismiss short stories with a flap of the hand, a pinch of the lips, and a deprecating, “Oh, I don’t do short stories.” It’s said in the same tone of voice a vegetarian would say, “I don’t do meat.” When I come back with, “Why not?” the answers are always vague and insubstantial. I have yet to find anyone who can give me a solid, tangible reason they don’t like short stories. I suspect they’re afraid of short stories, an aversion that began in grade school . . . By their nature, short stories compress language to its densest gem-like state (second only to poetry); novels sprawl and emphasize plot and are generally more accessible to younger readers. I could be wrong, but I think the average 15-year-old would rather read The Catcher in the Rye than “Young Goodman Brown.”

Writers themselves have a hard time selling their short stories. Most are grateful if their stories see print in obscure literary magazines. This wasn’t always the case. In the 1920s, F. Scott Fitzgerald was able to support a lavish lifestyle through sales of short stories to popular magazines; the Saturday Evening Post paid him as much as $4,000 for a single story. In 1930, Edith Wharton sold a story to Cosmopolitan for $5,000.  (Imagine how much that would be in today’s dollars!) Writers used the income from short stories to support themselves as they worked on novels. Now, writes critic A.O. Scott in the New York Times, “A young writer who turns up at the office of an editor or literary agent with a volume of stories is all but guaranteed a chilly, pitying welcome. That kind of thing is just not commercial.”

I’ve been reading that the short story is experiencing a resurgence. It’s true that Alice Munro, arguably the best short story writer of our time, won the Nobel Prize for literature in 2013, and that George Saunders was a 2013 National Book Award finalist for his short story collection, The Tenth of December.  And digital publishing may be revitalizing the short story; in an article in the New York Times entitled “Good Fits for Today’s Little Screens: Short Stories”, Leslie Kaufman writes, “The Internet may be disrupting much of the book industry, but for short-story writers it has been a good thing.” She quotes Amber Dermont, a novelist who has recently published a short story collection: “The single-serving quality of a short narrative is the perfect art form for the digital age . . . Stories are models of concision, can be read in one sitting, and are infinitely downloadable and easily consumed on screens.”

In the same article, Cal Morgan, an editor at HarperCollins, says that digital communication has had a positive influence on younger writers:

The generation of writers out of college in the last few years has been raised to engage with words like no generation before. Our generation was raised on passive media like television and telephones; this generation has been engaged in writing to each other in text messages on a 24-hour basis. I think it has made them bolder and tighter.

Hmmm, I’m not sure if texting makes anyone’s writing “bolder and tighter”, and I really don’t think the new generation of writers has “been raised to engage with words like no generation before” — but I appreciate the attempt at putting a positive spin on round-the-clock texting.

I recommend starting with a short story anthology so you can read what an editor considers the best stories by top short story writers. I love the Best American Short Stories series, which comes out in paperback every fall. Each year, there’s a different editor, who’s a well-respected author; the 2013 volume is edited by Elizabeth Strout. The O. Henry Prize Stories series is also wonderful. I can almost guarantee that if you pick up any book in either of these series, you will find at least one story that speaks to you. 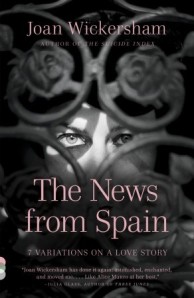 Next on my list? The News from Spain by Joan Wickersham.

A Brief History of the Short Story in America (Critical Mass, blog of the National Book Critics Circle of America)