In occupied Germany, the refrain “We didn’t know” was becoming as common as “Ich bin kein Nazi” (I am no Nazi). The Germany Manny had left when his mother put him on a train as a fourteen-year-old to join other Jewish refugee children on a ship to America had lots of flag-waving Nazis. Now that the Thousand Year Reich had fallen, where had they all gone?
Bruce Henderson, Sons and Soldiers, describing the wartime experiences of Manfred Steinfeld, 82nd Airborne Division 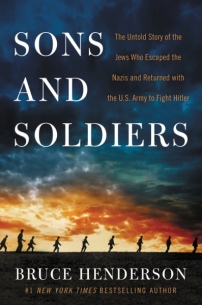 The subtitle of Bruce Henderson’s Sons and Soldiers is The Untold Story of the Jews Who Escaped the Nazis and Returned with the U.S. Army to Fight Hitler. (Is it my imagination, or are the subtitles of nonfiction books keep getting longer and longer?) This workmanlike subtitle not only summarizes the book, but tells readers two things about Sons and Soldiers: 1) It’s one of a seemingly endless stream of books about fascinating but little-known aspects of World War II; and 2) The writing will be competent but not brilliant.

I will read almost anything about World War II, and I’m particularly drawn to relatively undiscovered stories, nonfiction and fiction. Sons and Soldiers, which tells the story of more than 2,000 German-born Jews who escaped Nazi Germany and joined the United States Army as military intelligence specialists, is exactly the kind of book that appeals to me. While It didn’t disappoint me –I found the stories of these extraordinarily brave men compelling and inspiring — Sons and Soldiers is not one of the best World War II books I’ve read. Henderson did an amazing amount of research on the Ritchie Boys, working with a team of researchers for two years to uncover their stories, and interviewing many veterans. Although he says, “Narrative nonfiction starts and ends with rigorous research, which allows an author to be meticulously selective in using only the material that adds to the impact of the story,” I thought he sometimes included too many details. I could have done without some of the long descriptions of battle scenes; I just wanted to know what the Ritchie Boys were doing.

What interested me most in the book were the stories of each of the Ritchie Boys that Henderson follows through the war years — their childhoods in Germany, their journeys to America, their wartime heroism, and the eventual fates of their families. I was captivated by Henderson’s account of the unorthodox interrogation technique that Werner Angress used during the Battle of the Bulge on a tough, battle-hardened German sergeant who, unlike most of his peers, refused to supply any information other than his name, rank, and serial number:

Werner shrugged and sat back . . . he inquired in German just how such an experienced old bird like him was taken prisoner by a bunch of green young Yankees. Offended, the prisoner began to stutter in response, then exploded in indignation. As the sergeant spewed an angry torrent of words, Werner interrupted with brief technical questions, all of which were promptly answered before the sergeant continued his diatribe. In this way, Werner soon knew the identity and strength of the sergeant’s unit, the names of his commanders, and other information . . . where the sergeant’s regimental headquarters were located, where their machine guns were placed, and even where the German soldiers lined up to get their chow.

After the war, the Army estimated that more than sixty percent of the credible intelligence gathered in Europe came from the Ritchie Boys. Their interrogation techniques relied not on bullying and intimidation, but on understanding the culture and psychology of the men they were interrogating.

The narrative isn’t linear, but jumps around as Henderson focuses on various Ritchie Boys — each of whom has a more incredible story than the next. I was sometimes confused, since one of the main characters would appear on one page and disappear for several chapters, only to show up in a different time and place. For example, the book opens with the arrest and deportation to Dachau of twelve-year-old Martin Selling. A couple of chapters later, he is released from Dachau and manages to obtain an exit visa from Germany. In the intervening chapters, we’re introduced to several other young German Jews whose families are trying desperately to get them out of the country, so when Martin reappears, most readers will find themselves flipping back to the beginning to reacquaint themselves with his story.

Despite my occasional frustration with the flow of the book, I couldn’t stop reading it. The courage these men displayed is almost unbelievable. As boys, they left their families behind, not knowing if they would ever see them again, and as young men, they risked their lives repeatedly, often turning down relatively safe assignments for dangerous missions. They all knew if they were captured by the Germans they wouldn’t be treated as American prisoners of war, but would be executed as Jews.

Stephan Lewy, one of the Ritchie Boys profiled in Sons and Soldiers, has spoken to more than 20,000 schoolchildren since he retired in 1991. One child asked him, “Are you like a cat with nine lives?” — a question that could reasonably be asked to any of the Ritchie Boys. Lewy, now ninety-one years old, has found it therapeutic to share his story, saying:

When I look into their faces as they listen to my story, I have hope that I can make a difference. My story shows what can happen if people do not act. Perhaps if enough people hear these stories, history will not repeat itself. I only hope the world has learned a lesson. 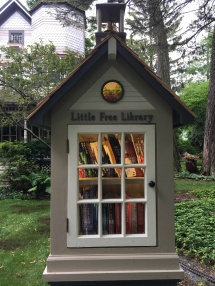 This Little Free Library is hidden away on a woodsy side street that doesn’t get much traffic, but that is a favorite of local runners, dog walkers, and stroller pushers. One of the fanciest Little Free Libraries I’ve seen, it includes interior lighting and has a child-sized Adirondack chair placed next to it for little readers.

There are more than 50,000 Little Free Libraries in all fifty states and all over the world. Established in 2010 in Madison, Wisconsin, and inspired by Andrew Carnegie, who funded more than 2,500 public libraries around the turn of the twentieth century, Little Free Library “is a nonprofit organization that inspires a love of reading, builds community, and sparks creativity by fostering neighborhood book exchanges around the world.”

Almost every day, as I walk my dog, I open the door and peek in to see which books have been donated and which have been taken. Children’s books go fast, I’ve noticed, as do mainstream mysteries and literary fiction. Time for Bed by Mem Fox, The Battle of the Labyrinth by Rick Riordan, Counting Kisses by Karen Katz, Gone Girl by Gillian Flynn, Life After Life by Kate Atkinson, The House at Tyneford by Natasha Solomons, and Most Wanted by Lisa Scottoline all disappeared overnight. Meanwhile, none of our neighborhood readers seem interested in Joseph Campbell’s study of the primitive roots of mythology, The Masks of God, or Rodney Dangerfield’s autobiography, It’s Not Easy Bein’ Me: A Lifetime of No Respect But Plenty of Sex and Drugs.

I have a shameful confession. I am the neighbor who contributed It’s Not Easy Bein’ Me to the Little Free Library. When I placed it on the shelf, alongside prizewinning novels The Good Earth and Cold Mountain, I didn’t fully understand the philosophy of Little Free Libraries. This is clearly spelled out in the organization’s website:

Little Free Library book exchanges have a unique, personal touch. There is an understanding that real people are sharing their favorite books with their community; Little Libraries have been called “mini-town squares.”

It’s Not Easy Bein’ Me is not one of my favorite books. In fact, I have no idea how it ended up in my house. Did I pick it up at a booksellers’ conference? Did it arrive in the mail, unsolicited, for me to review? Did it belong to one of my children? I have no idea, but when I scanned my shelves for something to donate to the new Little Free Library, I didn’t see anything I wanted to part with, until I spotted It’s Not Easy Bein’ Me. I certainly didn’t want to part with one of my favorite books. Now I feel guilty, because obviously Little Free Libraries are not intended to be dumping grounds for dud books — although an article in the Denver Post calls Little Free Libraries “Little Jails for Bad Books.” Maybe someone in town is a huge Rodney Dangerfield fan and will be thrilled to find a pristine, hardcover copy of this book, free for the taking.

Dan Greenstone, a resident of Oak Park, Illinois, received a Little Free Library as a gift from his wife. He found that he and his family ended up supplying books to their freeloading neighbors, rarely receiving any in exchange. In a Salon article called “My Little Free Library war: How our suburban front-yard lending box made me hate books and fear my neighbors“, Greenstone says:

Little Free Library has a seductive marketing slogan that’s carved into the top of every unit: “Take a Book; Return a Book.” Such a simple equation. And such wishful thinking. Take? Oh, absolutely. People are, in fact, really good at that part.

My neighbors seem to be less greedy than Greenstone’s. I’m going to keep donating books to the Little Free Library, but it’s unlikely I’ll share my favorites. Saints for All Occasions? No way. ‘Round Midnight? I don’t think so. The Devil and Webster. No. Maybe I’d lend those to trustworthy friends. I’d be happy to donate my copy of Idaho . . . somebody might like it.