One of the unexpected pleasures of Books on the Table has been reconnecting with old friends. I recently heard from Gloria, who worked at Lake Forest Book Store for several years and then moved to Door County, Wisconsin. Gloria, who had a rewarding career as a nurse, turned to bookselling later in life.  Her first job was at Borders back in the days when applicants had to take a difficult test to prove their “bookworthiness”.  In response to “10 Books I’d Save in a Fire (or a Flood)”, Gloria commented:

When I was a child my family home had two devastating fires (one electrical/smoking related and the other set by a sibling playing with matches). No one was ever hurt but many treasured possessions like books and photos were lost. Then as a young mother, I lost my children’s baby pictures to a cold-hearted burglar. So . . . my mind is prepared and my old childhood books are already gone. (After reading two of my current recommendations, Ru and A Constellation of Vital Phenomena, I place my losses in the perspective where they belong.) What I would save now are these little ‘What I Read’ journals. For the last several years I write a short synopsis of everything I read; include the date, my reaction, little tidbits like “bought off the table at LFBS(!)” or “read during January 2014 deep freeze”. As I get older I sometimes don’t remember what I had for dinner last night….these journals refresh my memory of all the many great, and occasional not so great, books I’ve read. I know people who’ve done this much of their lives. Lucky them!

Gloria has met many other book lovers in Door County, including one who has little boxes filled with index cards with information about books she’s read, and one who has a list of all the books she’s read going back to high school. That’s impressive — although when I was in high school, I did have a little journal full of “meaningful” quotes from poems and songs. I would be embarrassed to read that now, especially when I recall that one of those quotes was from the Grateful Dead: “What a long, strange trip it’s been”.

I’ve never kept a book journal. I have a collection of  lovely blank books that I bought with the intention of keeping track of the books I’ve read (and want to read)  but those books are still empty. Every time I bought a beautiful hardbound journal, I thought that would be the one that would inspire me to record my reading. Now, I’m trying to remember to list my books  on the “Recently Read” and “In My Stacks” pages of Books on the Table, but I’m not even doing very well with that. I wish I’d kept a journal of all the books I’ve read, starting in childhood. This year, I’m going to keep track of the books I’ve read, and I’m going to keep a list of books I plan to read. It’s certainly an easier resolution to keep than losing 10 pounds or working out every day!

Apparently, even successful authors have difficulty remembering to use their reading journals. While procrastinating this morning, I found a post called “The Reading Resolution” on the Jungle Red Writers (“smart and sassy crime fiction writers”) blog. Deborah Crombie says:

I have attempted, on numerous occasions, to keep track of WHAT I read. I have a book journal, with, well, maybe three pages filled out.  I’ve put books in my personal journal, occasionally. (And don’t ask how long it’s been since I made an entry in that!)  I’ve made notes on what I’m reading now and again in my calendar.

What I DO want to try in 2014 is keeping a book journal. I get so frustrated when someone asks me, “what are you reading?” or we do

one of our book recommendation posts here on JRW, because half the time, I can’t recall the name or author of the great book I devoured just last month!

Does anyone have any suggestions for a really good-looking book journal to make it easier for me?

I’m sorry, Julia, but I have some very good-looking journals and they haven’t made it any easier for me . . . good luck! 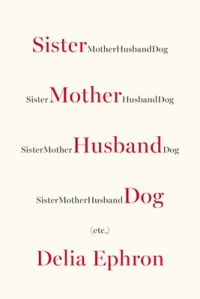 Four sisters, brought up in Hollywood by  famous screenwriter parents, all grow up to be successful writers. Sounds like a novel or movie script, doesn’t it? In fact, the youngest Ephron daughter, Amy, was named after the youngest March daughter in Little Women. In an Oprah magazine article, Hallie Ephron says:

As we got older, we grew comfortable in roles that met our parents’ expectations. Nora was the smart one. Delia, the comedian. I was the pretty, obedient one. And Amy was the adventurous mischief-maker. But in reality, we were more alike than we were different—all bossy and opinionated, witty and articulate, like our mother. At dinner, a three-course event that anchored every evening at 6:30 sharp, the competition for airtime was Darwinian.

This morning, I listened to Terry Gross interview Delia Ephron about her collection of autobiographical essays, Sister Mother Husband Dog. In the interview, Delia described the Ephron dinner table. Her father would shout, “That’s a great line — write it down!” whenever one of his daughters said anything clever or amusing. The four girls were groomed to be writers from an early age. Nora, the eldest, was an early success — “published when she was born”, according to Delia. The other three were relatively late bloomers. Delia published an essay, “How to Eat Like a Child”, in the New York Times when she was 32, and her writing career took off from there, including  over a dozen books and numerous plays and screenplays. Many of the scripts were co-written with Nora. Amy began writing in her late thirties, and Hallie got started when she was close to 50.

Delia covers a lot of territory in Sister Mother Husband Dog. The first essay, “Losing Nora”, made me cry . . . and made me deeply grateful for my own sister. (And it also made me grateful that I was fortunate enough to see Nora’s last play, Lucky Guy, last year on Broadway.) My favorite essay is called “Bakeries”, and of course, it’s about bakeries — but also about “having it all”. You’ll have to read the whole essay to see how Delia gracefully segues from bakeries to the concept of “having it all”, but here’s one of my favorite passages:

To me, having it all — if one wants to define it at all — is the magical time when what you want and what you have match up . . . It might be a fleeting moment — drinking a cup of coffee on a Sunday morning when the light is especially bright. It might also be a few undisturbed hours with a novel I’m in love with, a three-hour lunch with my best friend, reading Goodnight Moon to a child, watching a Nadal-Federer match.

Delia has a wicked sense of humor — honed, she says, at that Ephron family dinner table. She says, “That’s where I learned how to tell a story and that I was funny.” Her thoughts on her  wayward hair, the banks taking over her neighborhood,  Twitter/modern technology, the “name-jacking” of her website, and Anthony Weiner made me laugh out loud. Weiner, she tells us, “could not have it all”.

Sister Mother Husband Dog starts with an essay about Nora’s death and ends with “Collaboration”, about the scripts Nora and Delia worked on together.  I loved reading about their writing process and about the inner workings of the movie business. One of their most successful projects was the screenplay for You’ve Got Mail, one of my favorite movies. Delia says that screenplay was “an especially good collaboration”; they chose to set it in the world of books because “we both loved books, had grown up in a house were books were worshipped”.  When I finished reading “Collaboration”, I wanted MORE — more of Delia Ephron’s wisdom, insight, and humor.

In the Fresh Air interview, Terry asked Delia how Nora’s premature death affected Delia’s feelings about getting older, pointing out that one of Nora’s best-known works is her collection of essays about women and aging, I Feel Bad About My Neck. Delia’s poignant response was, “I do feel that I have to do everything quickly. I don’t want to waste a day”.