Is anyone else really, really tired of the term “curated”? To quote from the Chowhound website: “You curate a museum, or perhaps an art collection for a billionaire”. I agree — restaurants don’t “curate” wine lists, and book reviewers don’t “curate” lists of books. I promise never to use that annoying word in this blog! What I will do is present a list of books that my oldest son liked a lot. Today is David’s 27th birthday, so of course I bought him a book. (I also bought him a plane ticket, but he’ll need something to read on the plane, right?) I started thinking about David’s evolution as a reader, from Richard Scarry’s Cars and Trucks and Things That Go, to the DK Eyewitness Pond and River LIfe, to Rick Reilly’s Who’s Your Caddy?.

To make a silly analogy to the animal kingdom, readers can be divided into three categories: herbivores (fiction readers), carnivores (nonfiction readers), and omnivores (people who read anything). David, like so many of his gender, is a carnivore. Even as a young child, he preferred the fact-oriented series The Magic Schoolbus to its fictional cousin, the Magic Tree House series. (Although he loved Jon Scieszka’s  books about the Time Warp Trio — it must have been the humor. I’ve found, as a bookseller and a parent, that if a book is funny a little boy will like it.) 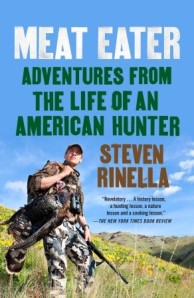 So is it any surprise that a book David recently enjoyed, and recommends to other carnivores, is called Meat Eater? It’s written by journalist Steven Rinella, also the author of American Buffalo: A Lost Icon. But don’t take David’s word for it. Here’s what the New York Times and Wall Street Journal had to say about the book:

The stories in Meat Eater are full of empathy and intelligence….In some sections of the book, the author’s prose is so engrossing, so riveting, that it matches, punch for punch, the best sports writing. When Mr. Rinella wades into the surging Grand River, to throw a fly for steelheads, the story moves as well as Tom Callahan writing about Johnny Unitas in the 1958 championship or Bill Nack writing about Secretariat. — Wall Street Journal

Truth be told, I have lived a life plenty comfortable with my disdain toward hunters and hunting. And then along comes Steven Rinella and his revelatory memoir Meat Eater to ruin everything. Unless you count the eternal pursuit of the unmetered parking space, I am not a hunter. I am, however, on a constant quest for good writing. . . This is survival of the most literate. —New York Times

If you’re a carnivore, or know someone who is, here are a few other suggestions from David’s library (both his childhood library and his current bookshelves):

Harris and Me (Gary Paulsen)
All Paulsen’s books are wonderful, but this one is special. It’s about a city boy who spends the summer on his cousin’s farm. There are many hilarious incidents, with just the right amount of crude humor to appeal to grade school age boys. It’s fiction — as are many of Paulsen’s other books (including the Hatchet series) — but still good for carnivores. 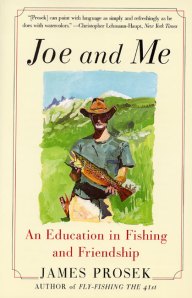 Joe and Me: An Education in Fishing and Friendship  (James Prosek)
A coming of age story about a teenage boy who runs afoul of the local fish and game warden. David’s copy looks like it’s been read a few times. Prosek has written many other terrific books about fly fishing, but this is the only one for YA readers.

Who’s Your Caddy?: Looping for the Great, Near Great, and Reprobates of Golf (Rick Reilly)
I think I enjoyed this book as much as David did, and I don’t even follow golf. Reilly has to be a great writer if he can get me to read a golf book. I started reading it because I was slightly worried about the content, and then got hooked. (Looking back, I can’t believe I was worried about what a sophomore in high school was reading. Can you tell David is my oldest?)

Into Thin Air: A Personal Account of the Mount Everest Disaster (Jon Krakauer)
A classic adventure story about an ill-fated ascent of Mount Everest in 1996. Krakauer’s Into the Wild is excellent as well.

The Psychopath Test: A Journey Through the Madness Industry (Jon Ronson)
Our whole family passed this book around on vacation a couple of summers ago — it’s fascinating!  What a relief it was to find that none of us is a psychopath.

Methland: The Death and Life of an American Small Town (Nick Reding)
Journalist Reding spent four years in a small town in Oelwein, Iowa, examining the effects of the meth epidemic on that town and similar towns all over the Midwest. My daughter and I couldn’t put this book down either. 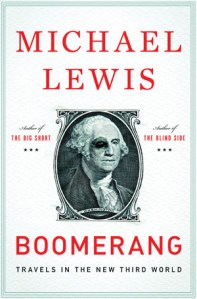 Boomerang: Travels in the New Third World (Michael Lewis)
It seems that Michael Lewis can do no wrong — his books, starting with Liar’s Poker (another favorite of David’s) — are uniformly excellent, transforming complicated economics into entertaining and informative narratives.

No Easy Day: A Firsthand Account of the Mission That Killed Osama Bin Laden (Mark Owen)
The movie Zero Dark Thirty tells a little bit of the story; this book, written by a Navy SEAL,  provides all the details. Apparently the author (who used a pseudonym) was criticized for revealing secrets without clearance from the government.

An American Caddie in St. Andrews: Growing Up, Girls, and Looping on the Old Course (Oliver Horovitz)
An American teenager spends a “gap year” in Scotland as a caddy at the world’s most famous golf course — and returns to work there year after year, even after college graduation.

Guess where we are going to celebrate David’s birthday tonight? A hot new barbecue restaurant in Chicago — Green Street Smoked Meats*. And I hope he likes the book I’m giving him: The Price of Silence: The Duke Lacrosse Scandal, the Power of the Elite, and the Corruption of Our Great Universities, by Bill Cohan. It just got a rave review in the New York Times.

*Thank you, Gina, for organizing!