Shakespeare on aging:
With mirth and laughter let old wrinkles come
And let my liver rather heat with wine,
Than my heart cool with mortifying groans.
The Merchant of Venice, Act I, Scene 1

April 23, 2016 marks the 400th anniversary of Shakespeare’s death. Historians believe that Shakespeare, in a bit of poetic serendipity, was also born on April 23. The Guardian lists some of the celebrations taking place worldwide:

It’s 400 years since the bard’s death this weekend and it’s also his 452nd birthday – as, legend has it, his birth and death were on the same day of the year. Hundreds of events to mark the occasion will be taking place in the UK and around the world – from Shakespeare’s Globe projecting 37 short films across London, to walks in “Shakespeare suburb” Shoreditch, to Shakespeare-inspired baking workshops, via late-night karaokes, promising-sounding “human sonnet jukeboxes” and hip-hop at the British Library, a Shakespeare parade in Stratford-upon-Avon and a fireworks display in Chicago.

Chicago’s fireworks display tomorrow is only one of 850 events the city is planning this year to commemorate Shakespeare’s “vibrancy, relevance, and reach”. Shakespeare 400 Chicago, spearheaded by the Chicago Shakespeare Theater, hopes to be “the world’s largest and most comprehensive celebration of Shakespeare’s enduring legacy”. Chicagoans and visitors can enjoy many unofficial Shakespeare events as well — how about heading to the Fizz Bar and Grill for “Fifty Shades of Shakespeare”?: “Be prepared to question everything you thought you knew about sexuality and Shakespeare as we tease out the Bard’s most provocative scenes. 23 roles, 12 scenes, 3 actors, and 1 DJ dance party to follow.”

In Chicago and around the world, April 23 is also “Talk Like Shakespeare Day”. Here are a few suggestions from the Chicago Shakespeare Theater:

Instead of cursing, call your tormentors jackanapes or canker-blossoms or poisonous bunch-back’d toads.
When wooing ladies, try comparing her to a summer’s day. If that fails, say “Get thee to a nunnery!”
To add weight to your opinions, try starting them with methinks, mayhaps, in sooth or wherefore. 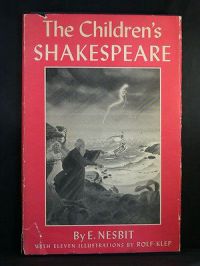 When I was eight or nine, someone gave me a book called The Children’s Shakespeare, by E. Nesbit (author of The Railway Children and many other classic children’s books) which summarizes each play in “words that little ones can understand”. In the introduction, Nesbit describes trying to read a A Midsummer NIght’s Dream to her young daughters, and having them complain they couldn’t understand the language:

“You said it was so beautiful,” Rosamund said reproachfully. “What does it all mean?”

“Yes,” Iris went on, “You said it was a fairy tale, and we’ve read three pages, and there’s nothing about fairies, not even a dwarf, or a fairy godmother.”

“And what does ‘misgraffed’ mean?”

“Stop, stop, ” I cried. “I will tell you the story . . . You will understand when you grow up that the stories are the least part of Shakespeare.”

I loved that book and read it until the pages were falling out. I still have it, and I’m embarrassed to admit that whenever I go to a Shakespeare play, I read the story first in The Children’s Shakespeare. That way, I can focus on the language and not on the plot — which, as we know, can be awfully confusing. Here’s how Nesbit introduces Romeo and Juliet:

Once upon a time there lived in Verona two great families named Montagu and Capulet. They were both rich, and I suppose they were as sensible, in most things, as other rich people. But in one thing they were extremely silly. There was an old, old quarrel between the two families, and instead of making it up like reasonable folks, they made a sort of pet of their quarrel, and would not let it die out.

I can’t remember which Shakespeare play was the first one I ever saw, but I can tell you the first one in which I appeared — Macbeth. This is also the last Shakespeare play (or actually, any play) in which I’ve performed. My sixth grade teacher at Peck Elementary School, Mr. Baxter, assigned Macbeth to our class. He correctly guessed that sixth graders would love the violence, insanity, treachery, and witchcraft in the play. (E. Nesbit did not include Macbeth in The Children’s Shakespeare. She had a hard enough time with Romeo and Juliet’s suicides, failing to mention that Juliet stabs herself.) I recall a classroom discussion about why Macbeth killed Macduff’s innocent wife and young children:

All my pretty ones?
Did you say all? O hell-kite! All?
What, all my pretty chickens and their dam
At one fell swoop?

Thinking back on it now, I’m surprised there was no parental outrage. Mr. Baxter directed our class in a shortened production of Macbeth. For the auditions, we had to memorize a soliloquy; I chose Macbeth’s final speech: “Life’s but a walking shadow, a poor player/That struts and frets his hour upon the stage . . .”. I had hoped for the part of Lady Macbeth, or at least one of the witches, but my audition must not have gone too well, because I was cast as Fleance. I had only one line to learn, and I felt I delivered it perfectly: “The moon is down; I have not heard the clock.” When my son played Oberon in a high school production of A Midsummer Night’s Dream, I went to all three performances. I was very impressed he had more than one line.

lthough I’m not much of a performer, I am an excellent audience member. Along with several dear friends, I’ve been a loyal subscriber to the Chicago Shakespeare Theater for many years. It’s a beautiful theater, built to evoke the design of the Globe Theater in London. No one throws rotten fruit at the stage as they supposedly did in Shakespeare’s time, although I once had the misfortune of being seated next to a heckler. (He didn’t care for Barbara Gaines’s modern interpretation of The Taming of the Shrew.

Next month, Chicago Shakespeare will present what it’s calling the “ultimate game of thrones”: Tug of War: Foreign Fire, which is a six-hour adaptation of Edward III, Henry V, and Henry VI, Part I. (The drama continues in the fall, with Tug of War: Civil Strife.) Thank goodness the marathon production includes a meal break and several intermissions!

My friend (and fellow Shakespeare buddy) Madonna gave me a little Shakespeare birthday book, with quotes for every day of the year. I love the quote for my birthday, which is from Henry V: “A good heart is the sun and the moon; or rather, the sun and not the moon, for it shines bright and never changes.” I’m looking forward to hearing those beautiful words.