You can tell a more incredible over-the-top story if you use a nonfiction form.
Chuck Palahniuk

There is really no fiction or non-fiction; there is only narrative. One mode of perception has no greater claim on the truth than the other . . .
E.L. Doctorow

November is a busy month, and that’s not just because of Thanksgiving and the beginning of the holiday season. I don’t know how these things work, but the powers that be have determined that November is also National Novel Writing Month, National Peanut Butter Lovers Month, Historic Bridge Awareness Month, Manatee Awareness Month, and International Drum Month — and of course, it’s No Shave November. Thank goodness for that, because who has time to shave while writing a novel and learning about historic bridges?

In the world of book blogging, it’s Nonfiction November.  Dozens of reviewers share their favorite recommendations for nonfiction books. Many of the same best-selling titles pop up again and again, and for good reason — they’re excellent books, well worth reading. Atul Gawande’s Being Mortal should be required reading for anyone who’s mortal, but you don’t need me to tell you about it.

I suspect many readers regard nonfiction as a homework assignment, not riveting reading. Novelist Chris Bohjalian said, “People seem to read so much more nonfiction than fiction, and so it always gives me great pleasure to introduce a friend or family member to a novel I believe they’ll cherish but might not otherwise have thought to pick up and read.” I’ve found the opposite — in my experience, nonfiction is usually a harder sell than fiction.

Over the past year, I’ve read plenty of nonfiction, including a few books that — at least in my little corner of the world — haven’t received the love they deserve. I’ve mentioned these terrific books before, but they’re worth mentioning again.

The Light of the World by Elizabeth Alexander
Poet Alexander has written a gorgeous chronicle of her family’s grief after her 50-year-old husband died unexpectedly. Every short chapter (most are 2-3 pages) is like a poem, with spare, beautiful feeling and intense feeling. The book is reminiscent of Joan Didion’s The Year of Magical Thinking.
From the Boston Globe review:  ” . . . A poetry lover, and a memoirist of loss myself, I expected to like Alexander’s book. But nothing could have prepared me for the experience of reading The Light of the World. It riveted me, rent me, sent me reeling. It flooded me with ineffable joy.”

The Rising: Murder, Heartbreak, and the Power of Resilience in an American Town by Ryan D’Agostino
The devastating true story of Dr. William Petit, who lost his wife and two daughters — and was critically injured himself — in a brutal attack in the family’s Connecticut home. Amazingly, Petit has not only survived but managed to rebuild his life.
From the Publishers Weekly review: “D’Agostino’s tender approach to his subject and story is impressive as he artfully charts Petit’s emotional thawing without resorting to cloying prose or melodrama . . .Though a horrific crime provides the backdrop, this book is a remarkable account of hope, fellowship, and love in the face of tragedy.” 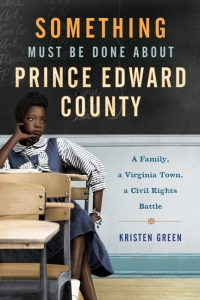 Something Must Be Done About Prince Edward County: A Family, A Virginia Town, A Civil Rights Battle by Kristen Green
Veteran journalist Green chronicles the years when Prince Edward County, Virginia closed its public schools rather than obey the federal mandate to desegregate — and tells the story of her family’s part in this shameful chapter of history.
From the New York Times review: “It is this personal story that makes her mix of memoir and history . . . so absorbing as she returns home to interview family and friends about a past that many would rather leave there.”

The World’s Largest Man by Harrison Scott Key
A hilarious (and sometimes heartbreaking) memoir about a bookish son’s relationship with his testosterone-fueled father. Although Key is a gifted humorist, The World’s Largest Man is not a nonstop laugh riot. At its heart, it’s a story about love and acceptance. Much of the book is heartbreaking and poignant. Key succeeds in showing us the contradictory aspects of his father’s deeply flawed personality — a personality that turns out to be a greater influence on him than he had ever imagined. Perfect for fans of Pat Conroy.
From the Florida Times-Union review: “The first part of this memoir by Savannah College of Art and Design professor Harrison Scott Key will have you laughing out loud. The remainder may bring you to tears . . . Key laments the lost art of Southern story-telling, one he believes has gone the way of the family farm, but once you read The World’s Largest Man, you’ll realize he may be a tad premature.”

Between You and Me: Confessions of a Comma Queen by Mary Norris
Much more than a copy editor, Norris is a delightfully wicked and witty writer. She’s been on staff at the New Yorker since 1978, upholding the magazine’s notoriously high standards. Her memoir is sprinkled with grammar advice, as well as plenty of gossipy tidbits. I enjoyed every page, and learned a few things besides.
From the New Republic review: “Norris’s very funny, lucid, and lively new book” is  “part memoir, part language guide, and part personal account of life at the New Yorker.”

Which books this year have you loved that haven’t received their share of attention?