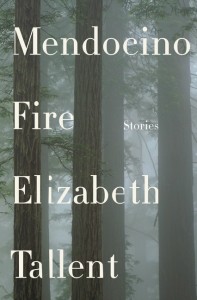 She could swear that an enthralled reader nineteen years old is the most beautiful animal on earth — at least, she’s seen one or two who were, in their spellbound moment, the incarnation of extremest human beauty. They were not themselves. Literature looked back at her from their eyes and told her certain things she was sure they ought not to have understood at their age.

Heidi Pitlor, series editor of The Best American Short Stories, estimates she reads between 3,500 and 4,500 stories a year — yet even she cannot explain exactly what makes short story succeed. “It’s easier, in the end, to say what doesn’t work than to pinpoint exactly what does, as a successful short story does not expose its mechanics”, she says in an article entitled “What Makes a Good Short Story‘, adding that “a good story tells you something interesting about someone. Things happen in a good story. People reveal who they are.”

The stories in Elizabeth Tallent’s brilliant collection, Mendocino Fire, unveil the inner lives of a diverse cast of characters. The stories are peopled with men and women who face turning points in their relationships with others and emotional crises within themselves. The twenty-something son of a fisherman comes to term with his father’s rejection (“The Wrong Son”); an aging political activist blames a scavenged Persian rug for the demise of his hasty marriage (“Tabriz’); a wronged woman drives across the country to track down her ex-husband and his new wife, with surprising repercussions (“Nobody You Know”); a working-class couple pressure their teenage son into a shotgun marriage and become entwined with his troubled wife (“Never Come Back”); a young woman embarks on an impulsive affair with a famous writer (“Narrator”). These five stories, and the five more that comprise Mendocino Fire, exemplify short story writing at its best.

As every writing instructor I’ve ever had has emphasized, short stories depend on scenes. Pitlor emphasizes the importance of scenes:

Sometimes, story writers seem to forget to write scenes . . . Too often, we as readers enter a story via a small action (a door opening, a phone ringing) and then are held captive while the author utilizes a disproportionate amount of space introducing a character, his marriage, his children, his divorce, his parents and his emotional limitations before we return to the room he just entered or the phone call that just begun. In a 17-page story, each page matters. Each sentence matters. Pacing matters.

With one exception, the stories in Mendocino Fire are built on scenes. In “Narrator”, the protagonist describes the first hours she spent with her soon-to-be lover — a writer who understands very well the importance of detail:

We spent the night over coffee in a cafe on Telegraph Avenue, breaking story-length pieces off from our lives, making a slice of torte disappear in alternating forkfuls. Our waitress’s forgetfulness he explained as distraction: she had a sick child at home. How can you tell? Unicorn stamp on her left hand. How a local pediatrician commemorates non-crying visits.

Tallent, who has been an English professor at Stanford since 1994, is the author of three previous short story collections (In Constant Flight, Time with Children, and Honey), along with a novel (Museum Pieces) and a work of critical analysis (Married Men and Magic Tricks: John Updike’s Erotic Heroes). When Time with Children was published in 1987, the New York Times review commented that “Like John Updike . . . Ms. Tallent is interested in the ways in which the institution of marriage affects our contradictory yearnings for freedom and safety, independence and domesticity.” And like Updike, Tallent constructs beautiful sentences — some very short, some almost a full page in length. One sentence, in particular from “Briar Switch”, a story about a woman facing the impending death of her estranged father (and fittingly, the final story in the collection) is really a prose poem. Both physical and emotional coldness figure into “Briar Switch”, as this sentence excerpt illustrates:

At the other end of the closet is her father’s overcoat, and it stops her, his overcoat simply hanging there, not an overcoat she has any special associations with except that by virtue of being his it evokes the first overcoat she knew him in, no cold like the winter cold borne in with her father’s overcoat, coldest in its folds, but also, all over, distinctly cold, and as if the cryptic eyes your father turns on you were not mystery enough, this ghostly cold comes as a sly erotic assault, a little squall for your child’s senses when that coat shrugs its way down to you . .

Talent’s stories have been published in many magazines and anthologies (The New Yorker, Esquire, Harper’s,The Paris Review, The Best of Tin House, The PEN/O.Henry Prize Stories, and The Best American Short Stories) and have received many awards. Pitlor selected my favorite  story in Mendocino Fire, “The Wilderness”, for the 2013 edition of The Best American Short Stories.  This story breaks the rules — it’s a “sceneless” (to use Pitlor’s word) meditation. The story begins with an English professor contemplating her students’ dependence on electronic devices and their desire for constant connectivity, and ends with the professor ruminating on her great-great-grandfather’s experiences as a Civil War soldier in the Battle of the Wilderness and her own need for connection — with him and with other people. It’s a beautiful, poetic story that demands to be read again and again. The professor recalls a childhood visit to a museum, when she encountered mummies and “for the first time comprehended death”:

Her heart has always been the same size as it was that long-ago Sunday when she first saw those eyes pointed at both ends, and she has always felt the same to herself. Secretly, because people are supposed to go through enormous changes, to mature, she wonders if there is something wrong with her, to feel such consistency between who she is now and who she was then when she looked down into those alive-dead eyes.

The professor, like Tallent’s other characters —  Finn, the tree-sitter in “Mendocino Fire”; Clio in “Eros 101”;  the ex-wife in “Mystery Caller” — wants what we all want: intimate connection with other people, to know and be known. That universal longing links the ten stories of Mendocino Fire. The collection is Tallent’s first book in 20 years, but fortunately we won’t have to wait that long for her next book — she has a memoir,  Perfectionism, due for publication in 2016.