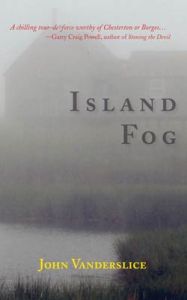 The future draped before him like an island fog: dank, listless, and inscrutable. Possibly even dangerous. Only his next step was visible, nothing beyond.
“Island Fog”

The air feels more wet and more cold than even five minutes ago, a thicker texture of gray. You are in the high tide of afternoon fog.
“How Long Will You Tarry?”

Strange things happen in John Vanderslice’s Island Fog, sometimes under the mysterious cover of fog and sometimes out in the open. The eleven linked stories in Island Fog all take place on Nantucket, a small island (49 square miles) 30 miles off the coast of Massachusetts. The haunting, often surreal stories are tied together by the island’s unique history and geography. The collection begins with a story set in 1795, “Guilty Look”, and ends with “Island Fog”, a story that takes place in 2005. In both stories, the protagonist is nightmarishly trapped in a situation that doesn’t seem to offer any hope of escape. A respected wigmaker and bank board member is determined guilty of theft on the basis of a “guilty look”, despite the fact he has located one of the actual criminals, and a college student becomes ensnared in an unbreakable “employment contract” with a diabolical employer. The sinister undertones in these stories, and in several others, reminded me of Shirley Jackson’s dark and ominous short fiction, set in seemingly peaceful New England towns. END_OF_DOCUMENT_TOKEN_TO_BE_REPLACED