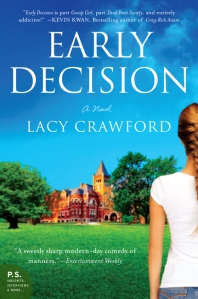 The clock is ticking for thousands of privileged high school seniors — the early decision deadlines at top colleges are looming. Lacy Crawford’s roman à clef, Early Decision: Based on a True Frenzy, is a glimpse into the world of an independent college counselor and her clients. The main character in Early Decision is Anne, a 27-year-old Chicagoan with degrees from Princeton and the University of Chicago who’s not quite sure what she wants to do with her life. She stumbles upon a career as a “college whisperer”  to students from wealthy families in Chicago and the North Shore. To the mothers, she’s a shoulder to lean on; to the fathers, she’s a voice of reason; and to the stressed-out teenagers, she’s a buffer between them and their anxious parents. But she wonders why:

. . . she was dating a man who cheated like mad and helping high school kids with their college applications .  . Every year, in late December as the application deadlines were bearing down, Anne swore she would never do it again. And then come spring, the phone calls came.

What I enjoyed most about Early Decision wasn’t the insider’s look at college admissions.  There have been several recent novels on that topic — most notably, Admission, by Jean Hanff Korelitz (made into a terrific movie starring Tina Fey) — as well as a spate of nonfiction accounts. Readers seem to have an endless appetite for information about the mysterious world of college admissions. I am no different — although, having weathered my three children’s college applications, I am growing a little tired of the whole subject. But I think  Early Decision is about much more than college — it’s about what it means to become an independent adult, and what it means to raise productive citizens. What decisions should parents make for children? How do we teach our children to make decisions for themselves? How can young adults gain self-knowledge and take control of their own futures? Anne, as well as her students, is struggling to make a life for herself:

Here is what was going to happen: Anne was going to wake up one morning in full possession of the authority she needed to go out and start her life. To acquire the position she really wanted — whatever that was — and succeed. . . She did not know how to explain why it hadn’t happened yet. She had been careful and diligent. She’d earned terrific grades. There had been classes in college about which she was passionate, and books she underlined so hard she tore the page . . . Her professors loved her, but none of them shared with her the knowledge she needed: How did such work lead to a life full of days? What, exactly, did one do?

Like her protagonist, Lacy Crawford was a private college admissions counselor.  As a high school English teacher, she discovered a talent for helping students with their personal essays for college. Parents began asking her to help their children with the admissions process, and a successful, 15-year career was born. When asked in an interview with The Atlantic why she didn’t write a tell-all memoir, Lacy said:

I have no interest in hurting people who have already been hurt by their parents’ ambition. These are stories of real devastation. And I was able to shine a spotlight on things with fiction that I wouldn’t have been able to do otherwise . . . I also didn’t want to write a memoir. I don’t have to relive my 20s. It wasn’t that fun the first time.

But reading Early Decision is fun — the humor is satirical without being mean-spirited, the writing is clever and fluid, the main characters are interesting and three-dimensional, and the ending is very satisfying.  Without giving too much away, I can tell you that nearly everyone makes the right decision. There’s an epilogue with updates on the five students that the book follows (four are wealthy, one is the daughter of a maid), as well as on the other characters — including April, Anne’s obnoxious neighbor. If you like ends tied up neatly in a book, this one is for you.

The literal French translation of roman à clef is “novel with a key”. The term originates from 17th century France when it was common for novelists to portray political and public figures masked as fictional characters. There might have been an actual key in the form of epigraphs. Today, the term is used a little more broadly, to describe a book about real events or people, with details obscured. (My favorite roman á clef of all time: Nora Ephron’s Heartburn.)