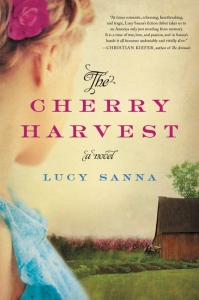 When I was a teenager in the 1970s, I didn’t read much YA literature — because there wasn’t much available, not because I was a particularly discerning reader.  I read everything from Jane Eyre to The Thorn Birds, without much awareness that there was a difference in literary quality. I did read some books that were specifically written for teens (The Outsiders, Forever, Mr. and Mrs. Bo Jo Jones), and my favorite was Summer of My German Soldier by Bette Greene.

Summer of My German Soldier, originally published in 1973, has been in print ever since. It tells the story of a young Jewish girl growing up in a small Arkansas town in World War II, with an abusive father and a cold mother who prefer her sister. She befriends a German POW from a nearby camp, and shelters him when he escapes.

The Cherry Harvest, Lucy Sanna’s debut novel, appealed to me because of its setting in Wisconsin and because it focused on a fascinating topic I hadn’t read about i in years — German POWs on American soil. When I started reading the novel I was reminded of Summer of My German Soldier and unearthed my old copy. Before I knew it, I was immersed in my 40-year-old book, which was as wonderful as I’d remembered. So when I returned to The Cherry Harvest, I’m sorry to say that the new book  — while enjoyable — suffered in comparison.

The Cherry Harvest is set on a family farm in Door County, Wisconsin, during World War II. Because of labor shortages, no workers are available to help with the harvest and the Christiansen family is living hand-to-mouth. When Charlotte Christiansen proposes that German prisoners move into her family’s migrant worker camp and provide much-needed labor to the surrounding area, she initially meets with resistance from the community. But eventually the local officials relent, and the POWs (called PWs in this book, as they were at the time) move in, resulting in repercussions no one could have predicted.

Charlotte is a difficult character to like. I have no problem with unlikable characters; some of the best characters in literature are unlikable, but they have qualities that make them compelling. I found Charlotte unpleasant and uninteresting, and couldn’t figure out what the men in the novel found so appealing about her. The very first scene of the book, which is written in vivid, gruesome detail, describes Charlotte butchering her daughter Kate’s rabbit so the family will have food on the table that evening. This scene successfully shows Charlotte to be a tough, pragmatic person who will do what she needs to do, without much emotion.

Charlotte’s husband, Thomas, is a reluctant farmer who had hoped to finish college and pursue a literary career. Now his son is fighting in Europe and Thomas has pinned his hopes on his daughter and fellow book lover. Kate plans to attend the University of Wisconsin as an English major and aspiring writer in the fall, even though Charlotte repeatedly comments that reading is a waste of time. (Just another reason not to like Charlotte!)

Kate is an endearing character, sheltered and naive, but ready to take on the world. She meets her first love early in the novel, a privileged senator’s son who is, in Kate’s view, shirking his patriotic duty. Lucy Sanna mentions in her author’s note that Kate’s part in the novel came alive when Sanna and her daughter were walking along the lakeshore in Door County and noticed a summer home that belonged to a politician.

Sanna, a Wisconsin native, says she was intrigued to learn that German POWs were housed in camps throughout the state during World War II. She says:

I saw great potential for conflict. I imagined a small town that feared the prisoners and a farming family that needed them. There would be a strong woman at the center of the controversy, an attractive teenage daughter who would surely come into contact with the prisoners, and a son fighting against the Germans in Europe.

Perhaps there is too much conflict — or too many subplots — in this novel. Each thread of the novel receives relatively superficial treatment, because there are so many threads. I would have preferred to have the novel concentrate on one or two issues, rather than try to include everything from post-traumatic stress syndrome to war profiteeringl. I’d also have liked Sanna to delve more deeply into one or two relationships — particularly Ben’s relationship with his fiancée, Josie — rather than skim over multiple relationships. Sometimes less is more, and I think with this book I’d have liked more character development and less plot.

Whenever I finish a book, I ask myself, “Who’s the audience for this book? Will I recommend it, and to whom?” I think The Cherry Harvest would be a good choice for YA readers making the transition to adult books. They will appreciate the straightforward writing, the fast-paced plot with plenty of action, and they will identify with the teenage characters, particularly Kate. And they’ll get a bit of a history lesson besides. (I also recommend that they pick up Summer of My German Soldier!)

For more information about Lucy Sanna, visit her www.lucysanna.com. Although she lives in California, you can tell she’s a native Midwesterner from this quote on her website:

I love weather. I gain energy from thunderstorms, and peace from snow. I like walking in summer rain as much as walking on a foggy ocean beach. I like sunsets on the lake. I like weather.

Fall in the Midwest, that’s my favorite season. Colored leaves crunchy dry beneath my feet. The clear air, the last sharp smells of life.