What was this thing, the pursuit of happiness, that moved out of reach as you approached? Was the emphasis on the wrong word? Was it simply about pursuit? Did said happiness evaporate when one got within proximity of it, moving off to lure one from yet another difficult, forward location?

Tatjana Soli’s new novel, The Last Good Paradise, is a black comedy that takes place on a remote island in the South Pacific. Ann and Richard, a successful couple in their thirties, run away from Los Angeles after an unscrupulous business partner bankrupts them. They take refuge at “the most isolated, lonesome destination” Ann could find — Sauvage, a resort “sans telephone, WiFi, or electricity”. Their relaxing idyll turns into a melodrama with a quirky cast of characters.

I began reading this book with high hopes, having admired the author’s previous novels — The Lotus Eaters (about a love triangle in wartime Vietnam) and The Forgetting Tree (a family tragedy set on a California citrus ranch). I’ve always been fascinated by French Polynesia, Captain Cook’s voyages, and,seafaring stories — especially Mutiny on the Bounty and Moby-Dick. END_OF_DOCUMENT_TOKEN_TO_BE_REPLACED

A few months ago, I shared a list of 10 books to read in the fall. I’ve read most of them — and Jane Smiley and Colm Tóibín, I apologize! I’ll get to Some Luck and Nora Webster very soon, I promise. I know they’re both going to be wonderful. (I really need to read Some Luck because the second book in Smiley’s trilogy, Early Warning, is coming out in April. )

Even though I still have many, many books from 2014 (and before) in my to-read stack, the publishing industry is not going to wait for me, or anyone, to catch up. So here’s a list of 10 exciting new books with winter 2015 publication dates. Is it a coincidence that three of them have “girl” in the title? Did the success of The Girl with the Dragon Tattoo and Gone Girl convince publishers and authors that “girl” is the magic word? I’ve already found several intriguing “girl” books coming out this spring — Hyacinth Girls, Girl Underwater, Girl at War . . . 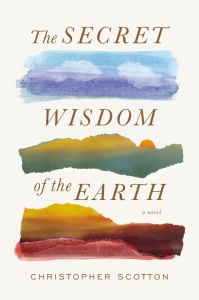 First of all, happy publication day to Christopher Scotton, whose debut novel, The Secret Wisdom of the Earth, is undoubtedly going to be one of my favorite books of 2015. It’s a  coming-of-age story set in Appalachia 30 years ago. Following a family tragedy, 14-year-old Kevin is sent to spend the summer with his veterinarian grandfather (“Pops”) in Medgar, Kentucky. Pops, whose life has brought him wisdom and an unwavering moral compass, will remind readers of Atticus Finch. Medgar is a depressed coal town facing a massive mountaintop removal operation that is blowing up the hills, backfilling the hollows — and deeply dividing the townspeople. The violent events of that summer will begin Kevin’s transformation from a wounded boy into an adult.

If you’re in the mood for a very smart, well-plotted psychological thriller, I recommend The Girl on the Train by Paula Hawkins (due next Tuesday, January 13). I read the entire book on one cold, rainy Sunday, thanks to a suggestion from my friend Sue at the Cottage Book Shop. The New York Times says: “The Girl on the Train has more fun with unreliable narration than any chiller since Gone Girl, the book still entrenched on best-seller lists two and a half years after publication because nothing better has come along. The Girl on the Train has Gone Girl-type fun with unreliable spouses, too.” I’m not sure I’d agree that “nothing better has come along” — what about The Headmaster’s Wife?

Tim Johnston has written a YA novel and a collection of short stories, but Descent (published today) is his first novel for adults. I haven’t read it yet, but it’s been receiving great reviews. Here’s what NPR has to say, including the inevitable Gone Girl comparison:

The premise of Descent may sound pretty straightforward: One summer morning while vacationing with her family in the foothills of the Rockies, a young girl, a high-school athlete in her senior year, goes out for a run in the higher altitudes — and disappears.

And Moby-Dick‘s about the whaling industry.

A good genre writer might have turned this into a conventional suspense novel, making us worry about the missing girl with every page that goes by — but Tim Johnston has written a book that makes Gone Girl seem gimmicky and forced. I worried about the missing girl with every page, yes. But I also suffered every torment felt by her family, father, mother, brother, and those linked to the family. So this is a thriller plus!

I’m currently reading and enjoying West of Sunset, by Stewart O’Nan (due January 13) about the last few years of F. Scott Fitzgerald’s life, when he tried to rejuvenate his career by working as a Hollywood screenwriter. I think O’Nan, author of 15 novels, is a brilliant and unappreciated writer. He writes beautifully about everything from the quiet days of an elderly widow (Emily, Alone) to a diphtheria outbreak in mid-19th century Wisconsin (A Prayer for the Dying) to a bankrupt couple trying to save their marriage (The Odds). 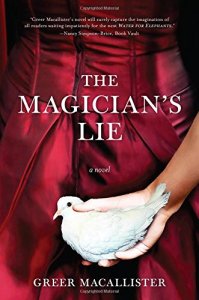 The Magician’s Lie (due January 13), by Greer Macallister, has been described as a cross between Water for Elephants and The Night Circus — sounds intriguing! Publishers Weekly gives it a starred review, calling it “top-notch”:

This well-paced, evocative, and adventurous historical novel from Macallister, a poet and short story writer, chronicles the career of America’s preeminent female stage illusionist at the turn of the 20th century, who, as the Amazing Arden, created the lurid, controversial stage act known as the Halved Man. When Arden’s husband is found murdered following her performance in Waterloo, Iowa, she falls under suspicion, particularly after she goes on the lam.

As I’ve mentioned before, I can never resist a boarding school novel. Some are excellent (Old School) and some are not (The Starboard Sea), but I read them all. The Half Brother, by Holly LeCraw, (due February 17) has an unusual perspective: it’s about a young teacher coming of age, not a student. The plot twists are truly amazing. The website The Millions just published its “Great Book Preview” for 2015, listing The Half Brother as one of its most anticipated releases:

The novel begins with an epigraph from gifted teacher-writer Andre Dubus, who says he “learned to walk into a classroom wondering what I would say” rather than planning. The Half Brother captures his spirit, and the result is one of the finest school-set novels in recent memory.

My friend and coworker Kathy, who has impeccable taste in books, recommends Funny Girl, by Nick Hornby, (due February 3). Funny Girl, about a young TV starlet in 1960s London, is “both a heartfelt defence and a wholly convincing example of what popular entertainment can achieve”, according to the London Telegraph. I love Nick Hornby for the comments

he made recently when speaking about his new novel at the Cheltenham Literary Festival:

My real campaign is to get everybody – adult, kids, everybody – to read something that they’re loving. And if they’re not loving it, stop reading it . . . Every time we pick up a book for a sense of duty and we find that we’re struggling to get through it, we’re reinforcing the notion that reading is something you should do but telly is something you want to do. It shouldn’t be like that. Novels should be like TV. It shouldn’t be hard work and we should do ourselves a favour. It doesn’t mean you have to read easy books, because you can have very complicated connections to very difficult books, but as long as you’re racing through it, that’s the thing.

Girl Runner, by Carrie Snyder, (due February 3) was recommended to me by another trusted source (also named Cathy), our HarperCollins sales rep. Inspired by the 1928 Canadian Olympic women’s track team, Girl Runner is the story of female athletes in the 1920s, an era when women’s sports became popular. According to the Canadian publication Quill and Quire:

Girl Runner is a plot-driven narrative of one of those forgotten women, fictional 104-year-old Aganetha “Aggie” Smart. Now wheelchair-bound, alone and abandoned in a nursing home, Aggie asks, “Who will write my obituary?” now that everyone who knew her is gone. The ambitious and uncompromising Aggie reflects on her rich and storied life: her childhood in rural Ontario, her work at the Rosebud Confectionery factory, the friendships she forged, her brief fame as a 1920s Olympic track star and Canadian darling, and her failures and triumphs along the way.

Doesn’t everyone sometimes dream of running off to an idyllic tropical island? (Especially if you live in Chicago and the temperature is hovering near zero . . .) The Last Good Paradise, by Tatjana Soli (due February 10) Is about a group of people who have done just that. Soli has one of the best author websites I’ve ever seen, and she introduces her latest novel with a beautiful letter:

“Twenty years from now you will be more disappointed by the things that you didn’t do than by the ones you did do. So throw off the bowlines. Sail away from the safe harbor. Catch the trade winds in your sails. Explore. Dream. Discover.”
Mark Twain

A successful attorney at a big Los Angeles law firm is about to open a restaurant with her chef husband. Suddenly they take off, and you find they have gone to the South Pacific with one-way tickets. How does that happen? I find it fascinating when someone starts one life to start another entirely different one, one of the most famous examples being Gauguin . . .

I know March seems far away, but I have to mention Erik Larson’s upcoming book, Dead Wake: The Last Crossing of the Lusitania (due March 10). I’ve loved every one of Larson’s books (In the Garden of Beasts is his most recent, published four years ago) and I have high hopes for Dead Wake. Here’s what Kirkus Reviews has to say:

Larson once again demonstrates his expert researching skills and writing abilities, this time shedding light on nagging questions about the sinking of the Lusitania on May 7, 1915 . . . An intriguing, entirely engrossing investigation into a legendary disaster. Compared to Greg King and Penny Wilson’s Lusitania (2014), also publishing to coincide with the 100th anniversary of the sinking, Larson’s is the superior account.