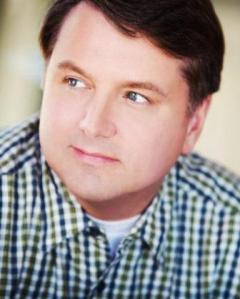 As I’ve said before, I think short stories don’t get enough love. So when I was asked to be a blog tour host for The Sense of Touch, a short story collection by debut author Ron Parsons, I jumped at the chance. It didn’t hurt that I had just read a story of his (“Big Blue”) on the Storyville app. This is a subscription app that delivers a short story “from the best story collections published by commercial and independent presses” to your IPhone or IPad once a week. It’s not free (because the founders believe all writers should be paid for their creative work), but it is inexpensive.

Ron Parsons is a partner at a law firm in Sioux Falls, South Dakota. He specializes in appellate work and has appeared before the United States Supreme Court. He has published many works in addition to the stories in The Sense of Touch (many of which were originally published in literary journals)  — but they appeared in the South Dakota Law Review, with titles like “Should the Eighth Circuit Recognize Procedural Misjoinder?” and “Cattle on a Thousand Hills: Reflections on the Beef Checkoff Litigation”. Now, I don’t know anything about law journals, but that last title sounds poetic to me; is it common to call legal articles “reflections”?

Parsons studied English as an undergraduate at the University of Minnesota. Several years ago, he came across some of the stories he wrote in college, and says he was inspired to revise the stories and make them “readable”. Like many Midwesterners, Parsons is overly modest. The stories are more than readable; they beautifully capture the physical and emotional landscapes of Minnesota, South Dakota, and Michigan. All of them focus on the yearning for human connection (“the sense of touch”) and the ways in which connections can be forged and broken.

The collection opens with “Hezekiah Number Three”, about Naseem, a brilliant but disturbed Bangladeshi immigrant searching for his father and his place in the world. The events in the story are set in motion by an accusation of sexual misconduct — touch gone wrong. Naseem, trying desperately to fight his solitude and his demons, befriends the story’s narrator, Tom. Naseem convinces Tom to go for a hot air balloon ride, promising they will fly so close to Mount Rushmore that they will “touch George Washington’s nose”.

In the title story, “The Sense of Touch”, the narrator is touched inappropriately by a trusted teacher; later, while volunteering for a campus organization, he is attacked by a developmentally disabled adult. He drifts away from his long-distance girlfriend: “Absence disembodies. If a person isn’t there for you to touch, they are not real.” His creative writing teacher, Vonda, tells the class that touch is the only sense that can be trusted:

“Now touch, touch, she continued. “Touch is right exactly there. You have it. It’s solid; you can grab and hold on. There’s weight. There’s substance. Light don’t matter, air doesn’t change it, nothing gets in the way. Touch is silent. And silence is the only way to contemplate infinite things. You see, touch works. Never trust anything, not until you can touch it. With touch, you know you know.” 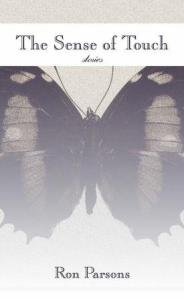 But Vonda is the narrator’s “untouchable muse . . . close enough to want to grab, and hold on”.  And the narrator does just that — he tries to hold on.

In “The Black Hills”, two old friends, Daniel and Ed,  reunite for a visit after Ed has lost his sight in an accident. His remaining senses, he explains, “are extremely acute. It’s a little something we sightless folks like to call sensory compensation”.  Ed, Daniel, and Daniel’s roommate, a Lakota woman named Dawn, go on a picnic to “Hippie Falls, the best and most secret swimming hole in all of the Black Hills”. In the dreamlike surroundings of the falls, Daniel and Ed begin quietly competing for Dawn’s attention. Daniel’s betrayal of Ed seems particularly cruel since it is destined to end their friendship; as he leaves the next morning, “He wanted to say something, but his words were cold to the touch”.

I’m not sure if it’s technically the best story in the collection, but the one I found most affecting was “As Her Heart is Navigated”. A young woman, Haley, learns that her seemingly gentle boyfriend, Clint, has a violent streak, when he punches a wall in a fit of rage, and that she is capable of healing touch, when she saves the life of an elderly neighbor. Haley feels physically and emotionally trapped by Clint:

He was encroaching upon her, cautiously, like a kind of creeping web — a sweet one, to be sure — a spool of cotton candy threads, unraveling and catching in her hair, attaching to her clothes. And the more she struggles, the more she feels stuck.

Parsons’s writing can be uneven. Some of the dialogue seems stilted, and sometimes he includes unnecessary exposition — for example, in the middle of an evocative description of a waterfall, he says, “It was a perfect spot for sunbathing”. But much of the writing is quite lovely, and the characters (a runaway farm wife, a barber raising his grandson, a twin who’s lost his brother) are well-drawn. He tackles some big themes — loneliness, commitment, friendship, and betrayal — always returning to the “sense of touch”. I look forward to reading more stories (and perhaps a novel?) by Ron Parsons.

6 thoughts on “Book Review — The Sense of Touch”