Let us go forth, the tellers of tales, and seize whatever prey the heart longs for, and have no fear. Everything exists, everything is true, and the earth is only a little dust under our feet.
William Butler Yeats, The Celtic Twilight: Faerie and Folklore

Forget the green beer, McDonald’s Shamrock Shakes, and buttons that say, “Kiss Me, I’m Irish”. Let’s celebrate one of Ireland’s greatest contributions to the world: its authors. Yeats, of course (my favorite poet of all time), James Joyce, Oscar Wilde, George Bernard Shaw, Samuel Beckett . . . all giants of literature, studied by every English major. I have to admit that although I loved Joyce’s Dubliners and  Portrait of the Artist as a Young Man, I struggled with Ulysses. I’m pretty sure I skulked into the college bookstore, looking for the CliffsNotes on the revolving wire rack tucked into the back corner.

A few years ago, Jeff and I visited Dublin for a few days. It was a perfect trip for a history buff (Jeff) and a literature lover (me).  We explored the Dublin Writers’ Museum, saw the Joyce statue on O’Connell Street, waited in line to see the Book of Kells at Trinity College, toured Kilmainham Gaol (Jeff’s idea, not mine), went to several plays, and stopped by more than our share of pubs. (We didn’t, however, retrace Leopold Bloom’s route through the city on the guided walk offered by the Joyce Cultural Centre. ) As someone who relied on the CliffsNotes to get through Ulysses, I didn’t feel entitled to take that tour!) We did have dinner at the Winding Stair on the River Liffey. Downstairs is one of the oldest independent bookshops in Dublin and upstairs is a restaurant serving “good, old-fashioned home cooking”.

Life is a journey up a spiral staircase; as we grow older we cover the ground we have covered before, only higher up; as we look down the winding stair below us we measure our progress by the number of places where we were but no longer are. The journey is both repetitious and progressive; we go both round and upward.
William Butler Yeats 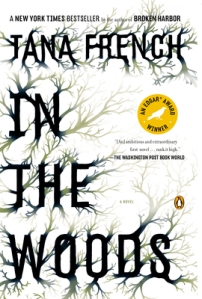 I always like to read something about the place I’m visiting, so on the flight to Dublin I read In the Woods by Tana French. It’s a murder mystery/psychological thriller, featuring  two detectives from the Dublin Murder Squad trying to solve two murders that have taken place 20 years apart. I’m not usually much of a mystery reader, but this one captivated me because of the gorgeous writing and the evocation of modern Ireland, in addition to the complex puzzle of two parallel crimes. One of those crimes is never solved; this is not a formulaic mystery. In an interview, Tana French describes her favorite mystery novels:

. . . the ones that experiment with the boundaries of the genre: Donna Tartt’s The Secret History (which is both my favorite literary novel and my favorite crime novel), where you find out on the first page who killed whom; Josephine Tey’s The Franchise Affair, a deeply unsettling study of a psychopath, where the villain is obvious almost from the start and the most serious crime is basically wasting police time; Dennis Lehane’s Mystic River, where the guilty go free and the innocent pay for others’ crimes.

French has written three other Dublin Murder Squad novels: The Likeness, Faithful Place, and Broken Harbor. Each one is narrated by a different detective, and each one touches on Irish themes — from the “Celtic Tiger” and the recession that followed to the country’s folklore and medieval history. They are, according to the New York Times, “brilliant and satisfying novels about memory, identity, loss, and what defines us as humans.” If you’re lucky enough to take a trip to Dublin, I highly recommend taking a Tana French novel or two along.

If I had to choose a favorite Irish author, it would be Sebastian Barry. When you read one of his novels, you know you are reading the work of a poet. (Barry is in fact the author of two collections of poetry and numerous plays, in addition to eight novels.) The New York Times says, “Mr. Barry has said that his novels and plays often begin as poems . . . but his language never clots the flow of his story; it never gives off a whiff of labor and strain. It is like a song, with all the pulse of the Irish language, a song sung liltingly and plaintively from the top of Ben Bulben into the airy night.” You can choose at random almost any passage from any one of his novels and be struck by the beauty of the language, but here’s one of my favorites, from A Long Long Way:

Such a singing voice he had. His mother, who was a blunt woman enough, one of the Cullens herself, daughter of the coppicer on the Humewood estate in Wicklow, got only good from it. She set him on a chair to sing like any woman might, and he threw his small head back and sang some song of the Wicklow districts, as might be, and she saw in her mind a hundred things, of childhood, rivers, woods, and felt herself in those minutes to be a girl again, living, breathing, complete. And wondered in her private mind at the power of mere words, the mere things you rolled round in your mouth, the power of them strung together on the penny string of a song, how they seemed to call up a hundred vanished scenes, gone faces, lost instances of human love.

Willie Dunne, the protagonist of A Long Long Way, who has such a beautiful singing voice as a child, ends up going to France when World War I breaks out in 1914, and fighting against his own people in the Easter Uprising of 1916. The Dunne family appears again and again in Barry’s novels. Willie is the brother of Annie Dunne, who is the title character of an earlier novel, and of Lily Bere, who is the main character in On Canaan’s Side. Similarly, The Trial of Eneas McNulty, The Secret Scripture, and the upcoming The Temporary Gentleman all focus on members of the McNulty family. Read as a whole, Barry’s novels cover the Irish experience of the entire 20th century. In interview with the Guardian, Barry says, “I am trying to rescue my characters from the cold hand of history, and from the silences that surround certain turbulent periods in our own history.”

The Irish tradition of oral storytelling continues to influence today’s Irish writers. The Guardian says, “Language remains, for Barry, something heard or spoken rather than black marks on a page, and he vividly remembers being read to as a child.”

“Storytelling pre-dates homo sapiens and the technique of writing,” Barry says. “I can’t actually do anything until I can hear it singing. I’m praised – or maybe blamed – for poetic writing, but it’s really just how I take it down. It’s not a conscious effort, it’s the language of how I hear and see those things.” In Angela’s Ashes, his wonderful memoir of growing up poor in Ireland in the 1930s and 1940s, Frank McCourt describes discovering Shakespeare while quarantined in the hospital with typhoid fever: “I don’t know what it means and I don’t care because it’s Shakespeare and it’s like having jewels in my mouth when I say the words. If I had a whole book of Shakespeare they could keep me in the hospital for a year.”

I’d love to hear Sebastian Barry read aloud. Beautiful writing and an Irish accent –what could be better? Until then, I’ll read his novels (I’m looking forward to The Temporary Gentleman, out this May) and the work of his contemporaries. Happy St. Patrick’s Day!