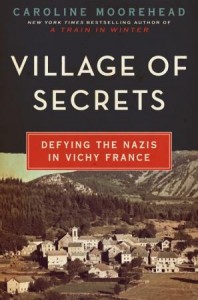 Recently, a customer asked me to help her choose her book group’s next selection. She mentioned that they had recently read Unbroken, and said emphatically, “No more World War II books! We’ve read enough about that.” This isn’t the first time I’ve heard that comment. I honestly can’t understand how anyone could ever read enough about World War II.

I think the first book I read about the Second World War and the Holocaust was Anne Frank’s The Diary of a Young Girl, when I was 9 or 10. One of the questions that book raised to me, as a child, is the same question that historian Caroline Moorehead examines in Village of Secrets: Defying the Nazis in Vichy France: What enables some people to risk their lives, and those of their families, to do what is courageous and morally right? Especially when those around them are either ignoring or participating in the evil?

Moorehead set out to chronicle the heroic acts of villagers in the mountains of the Ardèche, a remote area of eastern France. The residents of Le Chambon-sur-Lignon and surrounding villages were able to save the lives of thousands who were hunted by the Gestapo: resisters, Freemasons, communists, OSS and SOE agents, and Jews. Many of those who were protected and hidden were children whose parents had been sent to concentration camps.

France, as Moorehead describes in painful detail, was a country “not merely resigned to defeat, but ready to blame itself for what had happened, and eager to accommodate and anticipate lest the worst befall”. “Accommodating” and “anticipating” involved taking an active role in arresting and deporting French Jews:

It would be many years before it was acknowledged that, from the very beginning, with their censuses, their revisions of nationality, their Statuts des Juifs, their seizure of property and businesses and their expulsions from professions and jobs, Vichy had effectively paved the way for Hitler’s Final Solution in France . . . As the SS officer Helmut Knochen declared at his trial in 1947: “We found no difficulty with the Vichy government in implementing Jewish policy.”

Village of Secrets is an engrossing, painstakingly researched account of what Moorehead calls a “remarkable adventure in imagination and cooperation”. The story first came to light in the early 1950s when an American magazine published a story about André Trocmé, the Protestant pastor in Le Chambon who led his parish’s effort to rescue the targets of German persecution. This story helped France define its wartime experience, “by minimizing collaborators and celebrating resisters”. The story also contributed to the myth that the saintlike Trocmé, through Gandhian non-violence, the help of a “good German officer”,  and the cooperation of a regional prefect, saved 5,000 lives.

The truth, Moorehead found in her research — which involved interviews with many villagers — is much more complicated than the original news story about a pacifist minister who spearheaded a brave effort to save lives in Vichy France.

What actually took place on the plateau of the Vivarais-Lignon during the grey and terrifying years of German occupation and Vichy rule is indeed about courage, faith and morality. But it is also about the fallibility of memory.

Moorehead portrays Trocmé not as a saint, but as a complicated and mercurial person — and only one of many brave individuals who were instrumental in the resistance efforts. In 1990, a young minister, Alain Arnoux, organized a colloquium to discuss the “various renderings of the past” that had become so divisive in Le Chambon:

He was sick to death of the bickering, the animosities, the films, books, speeches, each one more inaccurate than the last, the ever inflated numbers of those rescued — 5,000! 8,000! . . . For three days in October 1990, the war on the plateau was rehashed. All those neglected by Trocmé . . .  the many other Protestant pastors, the Catholics, the farmers who hid the children, the children themselves, now grown into adults — were heard.

In her efforts to uncover the true story of the “Village of Secrets”, Moorehead asked herself — and others — what differentiated Le Chambon and the surrounding villages from other areas in Vichy France. Why were more people in, proportionately, saved from the Nazis in that little region than anywhere else in France? She acknowledges that “all over France, other villages, other towns, convents, families, Protestants, Catholics, Gaullists and communists, at great risk to themselves, sheltered those pursued by the Nazis . . . Parallel to the map of Vichy is a map of decency.” But somehow, she says, the story of the Plateau Vivarais-Lignon is different — a “felicitous combination of timing, place, and people”.

If you haven’t read enough World War II history — and I hope you haven’t — I highly recommend Village of Secrets. I will warn you that your head will spin from all the different names you will encounter — pastors, rescuers, children, German officials, and more. (There are two characters named Madeleine, for example.) Moorehead helpfully includes a list of all the major characters in the beginning of the book, as well as a timeline that includes major events in the war as well as in the Plateau Vivarais-Lignon.  I flipped back to these pages many times.

Moorehead’s narrative flows smoothly, despite all the dates, names, and details. She’s an accomplished author of history and 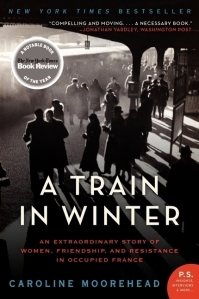 biography, with 15 books to her credit. I also recommend A Train in Winter: An Extraordinary Story of Women, Friendship, and Resistance in Occupied France. Village of Secrets is a natural companion to A Train in Winter, also focusing on the nature of heroism. In the epigraph to Village of Secrets, Moorehead quotes Mordechai Paldiel, a leading scholar on rescue during the Holocaust:

In searching for an explanation of the motivations of the Righteous Among the Nations, are we not really saying: what was wrong with them? Are we not, in a deeper sense, implying that their behavior was something other than normal? . . . . Is acting benevolently and altruistically such an outlandish and unusual type of behavior, supposedly at odds with man’s inherent character, as to justify a meticulous search for explanations? Or is it conceivable that such behavior is as natural to our psychological constitution as the egoistic one we accept so matter-of-factly?