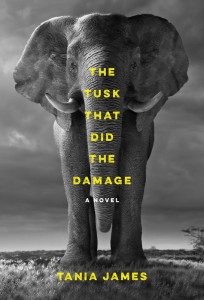 That is because of the tusk, the boy said, his eyes watering. It was the tusk that did the damage. What if I return it? Can’t I reverse the curse?

Oh my sweet stupid son, there is no reversing a curse, everyone knows that. But who says we cannot turn this curse into a blessing?

Tania James, The Tusk That Did the Damage

In the 1990s, a rogue elephant terrorized the countryside of northeastern India, killing 38 people. At first, journalist Tarquin Hall thought the reports of the elephant’s vengeful and cruel behavior were “implausible”:

Elephants do not breathe smoke and fire, they are not gods, and they certainly do not go around in the middle of the night knocking down people’s homes and singling out particular human beings for premeditated murder. Elephants are kindly, intelligent, generally good-natured creatures, like Babar and Dumbo.

Hall wrote a book, To the Elephant Graveyard, about the Indian government’s hunt for the murderous elephant and the changing relationship between human beings and elephants caused by the destruction of natural habitats. In an interview with the Los Angeles Times, Tania James explains how Hall’s book provided inspiration for The Tusk That Did the Damage, her novel about elephant poaching in southern India: 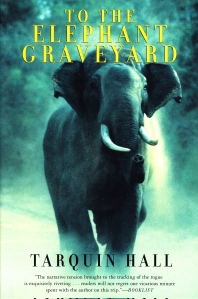 I was reading a nonfiction book called To the Elephant Graveyard . . . and it makes mention of a real-life elephant that used to bury its victims. The elephant would carry the body for miles beforehand, and in some cases, if people tried to take the body away, he would bring it back. Or he would guard the burial site . . .There was something kind of human in its madness, I guess, and I know this is kind of a human-centric way of thinking about it, but there was something recognizable about that madness that made me want to know where that elephant had come from. I wanted to know the tipping point that led to a life as a violent rogue elephant.

James deftly combines three narratives to tell the tragic story of the Gravedigger, an elephant who is orphaned, taken into captivity and trained to perform, and eventually goes mad and escapes. A young American woman making a documentary about a veterinarian who rescues and rehabilitates orphaned elephants narrates “The Filmmaker” chapters and the younger son of an Indian rice farmer narrates “The Poacher” chapters. The third thread of the intertwined narratives — the chapters titled “The Elephant” — are told from the viewpoint of the Gravedigger himself:

The Gravedigger was a few years old when it happened, still new to the world, but old enough that his mother had gone and calved another one. The newborn was a clumsy little cowpat. She toddled within the pillars of his mother’s legs precisely where he used to toddle. Whenever he tried to double back and regain her shade, his mother grumbled and nudged him onward with her trunk. If he fell behind, she flicked her tail until he grasped it, the two walking in tandem, ever in touch.

James includes the Gravedigger’s perspective, but she wisely writes his sections in the third person, implicitly acknowledging that she cannot fully understand his thoughts and feelings the way she can attempt to do with the minds of her human characters. Animal characters in literature generally fall into two categories: either they are stand-ins for human beings, essentially humans in animal bodies, or they are actually animals, experiencing the world around them through an entirely different lens.

Anyone who tries to write realistically from an animal’s point of view is running the risk of creating something inauthentic and possibly even silly. James, however, beautifully conveys the Gravedigger’s feelings without making him seem human.  Elephants have a very keen sense of smell, and James often describes scents that the Gravedigger detects and the emotions and memories they evoke. She describes his reactions to the sounds he hears and his confusion about language. During his initial training sessions, the elephant is mystified what the “pappans” (elephant keepers) are trying to teach him to do. He hears their commands as “!!!” James says that she found the voice of the Gravedigger by researching elephants in general, and then creating a character who doesn’t represent all elephants, but is an individual: “Like with any character, I was trying to write about someone who’s formed by their particular experiences. But you know, I don’t have a trunk [laughs], and I don’t know anyone who’s had a trunk explain to me what having a trunk feels like, so I tried to aim for a level of psychological realism, but within certain limits.”

One problem with novels containing multiple narratives, no matter how seamlessly they fit together– and The Tusk That Did the Damage coalesces very nicely — is that one of the narratives is usually more compelling than the others. That was certainly the case for me in this novel. All the narratives are interesting, and necessary to the novel, but the chapters about the Gravedigger are absolutely mesmerizing. As I was reading about the moral issues facing the filmmakers, the Indian Forest Department, and the poachers, I kept wondering what was happening with the Gravedigger. Who could imagine that an insane elephant, perhaps suffering from post-traumatic stress syndrome, could be an appealing character?

Shortly after I finished reading the book, I listened to a news story on NPR about the decision Ringling Brothers and Barnum and Bailey Circus have made to phase out the use of elephants in its circuses over the next several years. The report said that Asian elephants have typically been used in the shows because of their “more tractable nature”. The elephants  (called “pampered performers”) will be moved to a conservation center in Florida, where they can live out their days in peace and comfort, just like their human retiree counterparts.

The publisher is offering one hardcover copy of The Tusk That Did the Damage to a Books on the Table reader. To enter, please comment — or email me at bksonthetable@gmail.com. The giveaway will close on Friday, March 27.

To read more reviews of The Tusk That Did the Damage, visit TLC Book Tours, and click here for a very informative Q and A with author Tania James.

7 thoughts on “The Tusk That Did the Damage — Book Review”