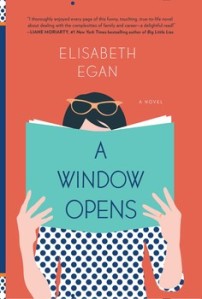 Sometimes you just know. And so you rearrange your life around what you glimpsed through a little window that opened for one second to show you a glimpse of something you might never get to see again. Even so, you know you will never forget the view.

Alice Pearse, heroine of Elisabeth Egan’s debut novel, A Window Opens, has an enviable life — a husband she’s crazy about, three great kids, a house in the suburbs, and a rewarding part-time job as the books editor of a women’s magazine. She even has a babysitter who’s a modern-day Mary Poppins, close and loving relationships with her parents and in-laws, and a best friend who owns the local bookstore. When Alice’s husband doesn’t make partner at his law firm and impulsively decides to open his own law practice (for which he has not a single client), Alice volunteers to become the family breadwinner. That involves making a deal with the devil — which in this case is Scroll, an up-and-coming company with a diabolically quirky corporate culture.

Like Lewis Carroll’s Alice, Alice Pearse falls down a rabbit hole and enters a strange new environment, peopled with exasperating and unpleasant characters. Alice soon discovers that Scroll, a thinly disguised version of Amazon, is the workplace from hell — especially for a book lover.  Greg, the president of Scroll (and architect of the “Paper is Poison” initiative), whose “revolutionary ideas about selling books” may not actually involve selling books at all, is thoroughly repulsive to Alice. At their first one-on-one meeting, Greg gestures to the stack of books on Alice’s desk and says:

“You really want to pollute the environment with that crap? . . . No, seriously, I just got back from a fact-finding mission at the Strand. That place is a tinderbox waiting to go up in flames. We have to ask ourselves, what kind of impact is all that paper having on our planet?”

Alice’s immediate boss, Genevieve, is more interested in how Alice reads than what she reads, asking her in an interview whether she “toggles” between her “device and carbon-based books”. Still, Alice is initially smitten with Genevieve, whom she mistakenly identifies as a fellow bibliophile. She’s flattered and intrigued when Genevieve describes Alice’s potential role at the company as the “ScrollCrier . . . someone to liaise with the publishing community at large”. After Alice joins the company, it gradually becomes clear to her that Genevieve is not her friend, and not even an effective manager :”Then it occurred to me that Genevieve might be implementing a new leadership strategy from the One Minute Manager. Befriend, then berate. Was that a thing?”

“Toggling” is one of the themes of A Window Opens — juggling roles as employee, wife, mother, friend, and daughter; switching between traditional means of connection (handwritten notes, “real” books, bookstores, in-person book groups) and modern technology (e-books, email, social media, Scroll’s “GatheringPlace”). Alice is pulled in so many directions as she “toggles” that she temporarily loses sight of what’s really important to her. Egan, who, like her novel’s protagonist, is a literary editor at a women’s magazine and a mother of three living in New Jersey, spent a year working as an editor at Amazon. In an article in the New York Times, she says, “‘That fish-out-of-water feeling was drawn from my experience at Amazon.'”

The article also mentions that the novel “is already causing a stir in the literary world, in part because it feeds into pervasive anxiety about the role of Amazon and the future of independent bookstores and publishing overall. It also arrives, coincidentally, in the midst of a debate about the work culture at Amazon.”

As I read A Window Opens, I wondered why there are so few novels that take place in office settings, given that so many people spend the majority of their waking hours in cubicles and conference rooms. Certainly, conflict abounds in offices — drama is not only found in other workplaces, such as hospitals and schools. An article in the Guardian asks, “Why don’t novels do work?”, stating that “we spend most of our lives making a living, but it’s a rare novelist that tackles this centrally important subject.” Even novels that appear to be about work actually aren’t, the article claims; “the books are set in offices, but the fulcrum of the plots tend to be about the characters’ private lives.” In her novel, Egan nicely balances (or should I say “toggles”?) the story of Alice’s career and the story of her personal life.

On the advice of early readers, Egan changed the original ending of the book. I don’t want to give anything away, so I won’t say anything more, but do me a favor: please read this wonderful book and let me know what you think of the ending. I’m dying to discuss it!