What makes a good book club book? I discussed this at length in another post (How to Choose Great Book Club Books) over a year ago, but on rereading that post I realize I didn’t clearly state one of the most important criteria: the best book club books are the ones your club is enthusiastic about reading. Yes, one of the best things about being part of a book club is reading books you wouldn’t ordinarily pick up — but that can be one of the worst things too. I would probably never have read Station Eleven — which is one of my all-time favorites — if it hadn’t been a book club selection, but I also would never have suffered through Interview With a Vampire, and I’m never getting back the hours of my life I wasted on Anne Rice. (In fairness to the long-defunct book club that picked Interview With a Vampire, I should mention that the club also selected Crossing to Safety, which remains one of my top recommendations for book groups.)

So, the first step is choosing books that the group looks forward to reading, rather than books that your members view as homework assignments. Keep in mind that you can’t please everyone, and almost every book club has at least one naysayer. The next challenge is making sure that your selections will inspire the kinds of discussions your book club is interested in having. Groups of friends (“private” clubs) often are more likely to talk about personal issues, while groups that meet in libraries, bookstores, community centers, etc. (“public” clubs) are more likely to concentrate on literary criticism. And although almost any book, in the right hands, can stimulate conversation, some books that are enormously fun to read are clunkers when it comes to discussion. Some books are too polarizing and may provoke arguments rather than civil discourse.

Here are 10 recent books that I think would get your book club talking.

Something Must Be Done About Prince Edward County by Kristen Green
Veteran journalist Green chronicles the years when Prince Edward County, Virginia closed its public schools rather than obey the federal mandate to desegregate — and tells the story of her family’s part in this shameful chapter of history.
Something to talk about: Green feels ashamed of her family’s actions both before she was born and during her childhood. Why do people feel guilty for past actions of family members? 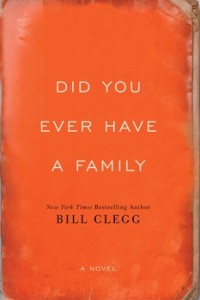 Did You Ever Have a Family by Bill Clegg
One of four American novels longlisted for this year’s Man Booker Prize, this gorgeously written novel will keep you up late at night and it will break your heart.
Something to talk about: The book was reviewed twice in the New York Times  — in the Sunday book review section and then on Monday, by a different reviewer. The first review was positive and respectful, calling the novel “masterly” and “thoughtful”; the second was not just negative, but unkind and snarky: “Critics have arranged warm reviews around it like tea candles . . .  But the pocket where I generally put the nice things I want to say about a book is, in this instance, pretty empty.” Why do you think two reviews would vary to that degree? And is there ever any reason for a mean-spirited review? 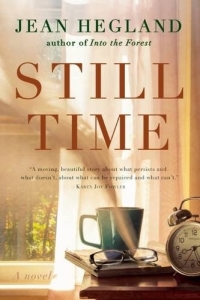 Still Time by Jean Hegland
John Wilson, an English professor with Alzheimer’s disease, finds that his extensive knowledge and understanding of Shakespeare helps him make sense of an increasingly bewildering world. Like Lisa Genova’s Still Alice, Still Time is about a professor suffering from dementia — but it’s an entirely different, and I’d argue, a more subtle and thought-provoking novel.
Something to talk about: John named his estranged daughter Miranda, after the heroine of one of his favorite Shakespeare plays. How do the themes of forgiveness and reconciliation in The Tempest connect to John’s efforts to make amends at the end of his life?

The Painter by Peter Heller
If these first lines don’t grab you, I don’t know what will: “I never imagined I would shoot a man. Or be a father. Or live so far from the sea.”  Jim Stegner is a painter of “outsider art” and fly fisherman with a propensity for violence who gets himself involved with some very bad people. Is it any coincidence that this character and Wallace Stegner (“the dean of Western writers”) share a last name?
Something to talk about: What caused Jim to become a violent man? What causes anyone to become violent?

Hold Still by Sally Mann
One of the best memoirs I’ve ever read — it doesn’t seem fair that Sally Mann is a talented writer and photographer! This is a book that must be read in print form — the photographs are integral to the story, and an e-book doesn’t do them justice. And if you discuss this book, someone must bring a book of Mann’s photographs to the meeting.
Something to talk about: What is art? (Now there’s a question you can never get tired of!)

Eleanor & Park by Rainbow Rowell
What a jewel of a book! It’s classified as YA, but the story of two lonely teenagers who become friends and later fall in love will appeal to anyone who has a heart. It’s hard to believe that Rowell’s characters aren’t real people; their voices are original and true. It’s the kind of book you want to buy multiple copies of and give to everyone you know.
Something to talk about: What makes this novel a YA novel? Yes, it’s told from the perspective of two teenagers — but so are many adult books.

The Secret Wisdom of the Earth by Christopher Scott
Following a family tragedy, 14-year-old Kevin is sent to spend the summer with his wise veterinarian grandfather in Medgar, Kentucky. Pops, whose life has brought him wisdom and an unwavering moral compass, will remind readers of Atticus Finch. Medgar is a depressed coal town facing a massive mountaintop removal operation that is blowing up the hills, backfilling the hollows — and deeply dividing the townspeople. The violent events of that summer will begin Kevin’s transformation from a wounded boy into an adult. Read this one instead of Go Set a Watchman!
Something to talk about: Each of the short chapters has a poetic title that was obviously chosen with care: “The Occasional Shifting of Boot Sole on Pine”; “The Price of Future Memories”; “Under the Protection of Red Cloud”. What does this add to the novel? Why do some authors number their chapters instead of giving them titles?

My Salinger Year by Joanna Rakoff
A delightful memoir about Rakoff’s stint as an assistant to J.D. Salinger’s literary agent, this book is, according to the Chicago Tribune, “a beautifully written tribute to the way things were at the edge of the digital revolution, and also to the evergreen power of literature to guide us through all of life’s transitions.” The book provides plenty of fodder for discussion on its own, but it would be fun to read in conjunction with a Salinger book or short story. It’s perfect for fans of Marjorie Hart’s Summer at Tiffany.
Something to talk about: What was your first “real” job, and what part did it play in your eventual career?

Bettyville by George Hodgman
When George Hodgman lost his editorial job in New York, he returned to his hometown of Paris, Missouri (“population 1,246 and falling”) to care for his 91-year-old mother. Hodgman’s honest and affecting portrait of their relationship moved me both to laughter and tears. This memoir is a terrific companion to Atul Gawande’s Being Mortal — which I believe everyone should read, but may be too painful and intense to talk about in a group setting. Ann Patchett has this to say about Being Mortal: “I’m all for people having different tastes, liking different books, but everyone needs to read this book because at some point everyone is going to die, and it’s possible that someone we love is going to die before us.”
Something to talk about: George, of course, does a lot for Betty — he moves in with her and becomes her caretaker. But what does Betty do for George?

The Best American Short Stories of the Century edited by John Updike and Katrina Kenison
I absolutely love short stories, and I can’t understand why they aren’t more popular — especially with book groups. They’re perfect for all those people who say they don’t have time to read. (For more on my thoughts on short stories, read 5 Reasons to Read Short Stories.) I recently joined a group that discusses short stories, and we spent a fascinating 90 minutes talking about “Bright and Morning Star”, written by Richard Wright in 1939. The group spends several months discussing stories from a particular decade in the 20th century. A group could choose any anthology of short stories or essays; the Best American Series (“the premier annual showcase for the country’s finest short fiction and nonfiction”), published by Mariner Books, will come out in early October. There are collections of travel writing, science and nature writing, sports writing, and more.

For further reading on choosing “discussable” books, please check out Is Your Book Club in a Rut? Here Are 10 Helpful Hints, by a librarian who’s experienced at working with book groups. “Steer clear of plot driven novels,” she advises, and I couldn’t agree more. The Girl on the Train is a terrific page-turner, but I’m not sure it would lend itself to an in-depth discussion. It would be fun to serve gin and tonics in honor of Rachel, although I don’t think the canned variety is available in the United States.

I’d love to know what your book club is reading this fall — and if you discussed any terrific books over the summer. I’m planning on compiling reading lists for different kinds of book clubs, and welcome your suggestions.

11 thoughts on “10 Books to Get Your Book Club Talking”