An art whose limits depend on a moving image, mass audience, and industrial production is bound to differ from an art whose limits depend on language, a limited audience, and individual creation. In short, the filmed novel, in spite of certain resemblances, will inevitably become a different artistic entity from the novel on which it is based.
George Bluestone, Novels Into Film

Books and movies are like apples and oranges. They both are fruit, but taste completely different.
Stephen King

I recently read an article in the website Wired provocatively titled “The Martian Proves Movies Are Now Better Than Their Books”.  The piece was, as I expected, a tedious criticism of Andy Weir’s bestselling novel. The novel isn’t a literary masterpiece, but it’s an absorbing and original story that makes readers — even readers like me, who think they hate science fiction — care about Mark Watney, the character who is abandoned on Mars. According to Wired, “Freed of Watney’s long monologues and Weir’s deep explanations of botany and chemistry, the movie is far more agile than the book.”

Well, Wired, that’s a big difference between books and movies. Books rely on narration, monologues, and detailed explanations; movies depend on visual images. The movie of The Martian is certainly more “agile”, if that means compressing the story into 140 minutes of screen time.

Maybe what the Wired reviewer was trying to say is that The Martian is a 4-star movie, but only a 3-star book? The material, in his opinion, was better suited to a movie than it was to a book. I disagree — the “long monologues” that the reviewer disliked helped me understand Mark Watney’s personality, and care about his fate. The scientific information piqued my curiosity, even though I didn’t fully understand much of it.

What’s surprising is that The Martian is such an entertaining movie, since most of the time only Watney is on screen. In an NPR interview, Weir said, “Matt Damon just completely nails the character of Watney. He’s exactly the way I imagined him.” Watney’s humor, intelligence, and buoyant attitude came through beautifully in the movie. Weir also commented on the visual impact of the movie:  “There are beautiful shots of Mars and Martian scenery and terrain. That’s something that’s really hard to convey in a book. There’s only so long you can describe scenery and landscape before the reader throws the book over his shoulder.”

For readers, it’s a real pleasure to see favorite books live a second life on the screen. It can be easy to find fault, especially when favorite scenes and characters are cut or altered, and sometimes the director’s entire vision seems wrong. (I’m thinking of the 2012 film version of Anna Karenina.) But readers need to remember that a faithful interpretation of a book often doesn’t make the best movie. It’s “better to take the spirit of a novel and work it into a new, original movie”, according to an Atlantic article on supposedly “unfilmable” books. Authors and filmmakers often agree that the goal of a successful movie adaptation is a movie that retains the spirit of the book. Director Ang Lee says, “Either you ruin a novel and make a great film, or you can be loyal to the book and make a bad movie.” Author David Mitchell adds, “Be careful . . . when a filmmaker says, ‘I won’t change a thing.'”

Some beloved books will never make it to the screen. The Catcher in the Rye is a case in point — despite the efforts of Hollywood producers (Samuel Goldwyn, Billy Wilder, John Cusack, Tobey Maguire, Leonardo DiCaprio, and more) — a movie has never been made. In a letter in which he refused to sell the movie rights, J.D. Salinger said, “The weight of the book is in the narrator’s voice, the non-stop peculiarities of it, his personal, extremely discriminating attitude to his reader-listener.”

2015 has been a terrific year for movie adaptations of books. The day after Thanksgiving, we saw the movie version of a book I loved, Colm Tóibín’s Brooklyn.It’s a jewel of a movie, and I highly recommend it. The story concerns a young Irish immigrant, Eilis, who comes to the United States in the 1950s. Horribly homesick at first, she falls in love and begins to make a life for herself. A tragedy calls her home to Ireland and she is torn between her two lives.

Colm Tóibín is thrilled with Brooklyn as a movie. He concurs with all the film critics who have commented on the performance of 21-year-old Irish-American actress Saoirse Ronan as Eilis. Asked if Ronan portrays Eilis as he imagined her, Tóibín commented on her emotional authenticity:

She was able to move from looking satisfied or in control, to suddenly seeming to be about to lose control, or feeling very sad. She could let a cloud cross her face very, very quickly and easily and convincingly in a few seconds. The camera’s on her face quite a lot, and you see everything she’s feeling about leaving home, going away. She doesn’t have to speak; it’s there. If you’re a novelist, you can feel only jealousy toward it.

After I saw the movie, I tracked down my copy of Brooklyn (which came out in 2009). I had marked several passages I particularly liked, including this one, which is such a clear and beautiful evocation of homesickness:

She was nobody here. It was not just that she had no friends and family; it was rather that she was a ghost in this room, in the streets on the way to work, on the shop floor. Nothing meant anything… . Nothing here was part of her. It was false and empty, she thought. She closed her eyes and tried to think, as she had done so many times in her life, of something she was looking forward to, but there was nothing. Not the slightest thing. Not even Sunday.

There’s a moment toward the end of the movie in which much more emotion is released than I will ever allow to occur because I work with a sort of restraint, and I like endings where the reader just doesn’t know exactly what happens. In a movie, you make a different pact with the audience. You can’t just end a page before the real ending, which I think in a novel you can always do, and you almost must always do.

Earlier in 2015, I saw several excellent movie adaptations of favorite books — Still Alice, Testament of Youth, and Far From the Madding Crowd (which inspired me to reread the book). My son tells me that Room is excellent, but I got claustrophobia reading the book and I’m not sure if I can sit through the movie! Opening this month are two movies based on nonfiction books I loved — In the Heart of the Sea and The Big Short. And of course, I can’t wait to see Macbeth. 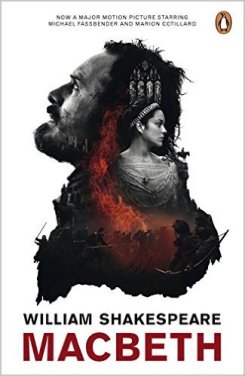 At least no American publisher has released a movie tie-in edition of Macbeth. (Sadly, Penguin released one in the U.K.: “Now a major motion picture . . .”). I’m not sure why publishers keep coming out with these movie tie-in editions, because readers hate them. We’ve had many customers choose to special-order a book with the original cover rather than buy the one with the movie tie-in cover we have in the store.  Two years ago, The Week published an article called “The Great Gatsby and 7 Other Hideous Movie Tie-In Book Covers”.  Some are worse than others, but I’ve seen very few that are improvements over the original covers.

What’s your favorite movie adaptation of a book?

5 thoughts on “Books on the Table Goes to the Movies”