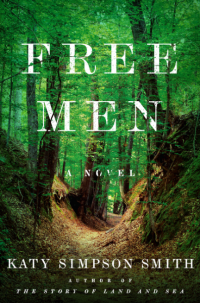 What is a free man except a man with money?
Bob, an escaped slave

My life was not my own, but my clan’s.
Istillicha, a Creek Indian

I have been in this country for twelve years, and from every angle I can only see that Americans have made a religion of the individual — it’s seeping already into the discontent slaves and the Indian factions . . .
Louis Le Clerc Milfort, French “tracker and deputy of justice”

Katy Simpson Smith’s second historical novel, Free Men, takes a hard look at one of the values our country holds dear: personal freedom. The American South in the late 18th century was a “landscape of merciless individual pursuit”, but people still longed for human connection. If you’re looking for a page-turner, this is not the book for you. But if you want to read a novel of ideas with gorgeous language, you’ll find Free Men rewarding and thought-provoking.

In  the spring of 1788, seven years after the British surrendered at Yorktown, three desperate men, all fleeing unbearable situations, join forces for a few days in the thick woods of what is now southern Alabama. They rob and murder a group of white traders (“American loyalists”) and their Indian guides. One of the guides escapes and reports the crime to his chief, Seloatka. Le Clerc, a French “gentleman adventurer” who is married to a Creek Indian woman, volunteers to hunt down the three murderers.

Le Clerc himself is on the run, having left behind a wife and a comfortable life in France: “I sought out the new, the republican, the individual,” he says. He cares more about the motives and characters of the three criminals than he does about actually bringing them to justice.  Justice, he says, “became secondary to wisdom.” More interested in the “burgeoning science” of psychology than history or philosophy, Le Clerc wants to hold a “fresh mirror up to the machinations of humanity”.

Each of the “ruthless highway robbers” that Le Clerc  pursues– Bob, an escaped slave, Istillicha, a Creek Indian, and Cat, a broken-hearted widower and farmer — has his own reasons for seeking freedom by heading west through unfamiliar and unsettled territory. They make an unlikely group of comrades; Le Clerc notes that:

In any country in the world they could not subsist together, yet here they were, wandering in a polite clump through woods that belonged apparently to no one, ignoring all the reasons to strike out on their own, to take the money and fall back into their segregated homes, because even America has rules.

The reader learns the basic facts of the story in the first two pages of the book. This is not a plot-driven novel; it’s a novel concerned with why things happened, not what happened. The four major characters — Le Clerc, Bob, Istillicha, and Cat — each, in their own distinctive voices, tell the stories of what brought them to the banks of what is now known as “Murder Creek”. Winna, the wife Bob leaves behind at the plantation, has her own short chapter in the middle of the book, reminding us that not only men sought freedom in the 18th century.

In an interview with Catherine Bock at Parnassus Books in Nashville (which picked Free Men for its First Editions Club in February), Smith said that as a reader, what she loves in a book are “sentences that are startling or playful or lush”. Free Men is full of sentences I’d describe using just those words; in fact, I stopped underlining them after the first couple of chapters because there were so many. Here are a few examples of sentences that stopped me in my tracks:

My brother Primus was dark and shiny, like someone had wrapped an old brown sheet around a boy of gold. (Bob)

There were soft apple spots in my father. (Cat)

I loved my mother’s brother as a boy will love a bear he sees through spaces in the forest. (Istillicha)

Smith, a history Ph.D. and the author of We Have Raised All of You: Motherhood in the South, 1750-1835, told an interviewer on WNCN in Raleigh, North Carolina that the exciting aspect of writing historical fiction is examining the “emotions and motivations behind people’s actions, which very often in history is something one can only speculate about, especially with the kinds of people who didn’t leave behind written records — the enslaved, women, marginal members of society.” Perhaps she has something in common with Le Clerc, who also wants to understand why people behave as they do.

Smith said “trying to get in the heads of 18th century men was a thrill for me.” While I thought the men’s voices were authentic for the most part, in some instances the characters slip into the mindsets of modern-day Americans. For example, would an 18th century slave say, “. . . this was not a life but a system, and for the first time my boyish grief took on the color of rage”?