See that little stream—we could walk to it in two minutes. It took the British a month to walk it—a whole empire walking very slowly, dying in front and pushing forward behind. And another empire walked very slowly backward a few inches a day, leaving the dead like a million bloody rugs.
F. Scott Fitzgerald, Tender is the Night

In Flanders fields the poppies blow
Between the crosses, row on row,
That mark our place; and in the sky
The larks, still bravely singing, fly
Scarce heard amid the guns below.

It’s impossible to comprehend the enormous tragedy of World War I. The statistics are shocking — for example, Germany and Russia both lost 1.7 million soldiers; France lost 1.3 million; and Great Britain lost close to 1 million. The United States, which entered the war in 1917, lost 126,000 soldiers. To learn more about America’s involvement in the 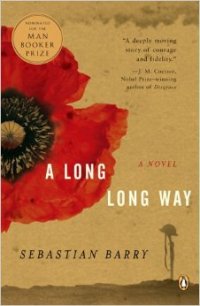 First World War, I recommend Richard Rubin’s The Last of the Doughboys: The Forgotten Generation and Their Forgotten World War. (Also, don’t miss Willa Cather’s One of Ours, which won the Pulitzer Prize for fiction in 1923.) For the French perspective, Jeff recommends Poilu: The World War I Notebooks of Corporal Louis Barthas, Barrelmaker, 1914-1918, a new translation of the actual wartime diaries of a French soldier.

Most of my World War I reading has been historical fiction about the British experience. I’ve mentioned several of my favorites before (A Long Long Way, The Absolutist, Birdsong) but I’ve neglected some others . . . and I’ve just finished reading a terrific new novel.

The Summer Before the War, by Helen Simonson (the author of Major Pettigrew’s Last Stand), is a kinder, gentler World War I book than most. The story centers on Beatrice Nash, a young Latin teacher who arrives in the small village of Rye during the summer of 1914. Determined to make her own way after the death of her beloved father, Beatrice is thwarted by the sexist mores of the times. She befriends a local family, the Kents, whose nephews — each for his own complicated reasons — volunteer to serve in France soon after war is declared. Beatrice is the most endearing character I’ve come across for a long time. She always has a quick comeback, even when faced with a supercilious solicitor or an arrogant American author. I loved every page of this book, which NPR says “rivals Simonson’s first in the charm department.” Yes, it’s charming — but it’s also poignant and beautifully written. You might even shed a tear or two. (By the way, if you’re suffering from Downton Abbey withdrawal, this is the book for you.)

I’ve also enjoyed Jacqueline Winspear’s Maisie Dobbs series. Maisie Dobbs, the heroine, is a World War I veteran, having served as a battlefield nurse. After the war, she trains with famous private investigator Dr. Maurice Blanche, and when he retires, she sets up her own detective agency. In most of the 12 novels, Maisie solves a  complex case in which First World War events play a role. In her review of the first book in the series, New York Times book reviewer  Marilyn Stasio says: “Romantic readers sensing a story-within-a-story won’t be disappointed at the sensitivity and wisdom with which Maisie resolves her first professional assignment, an apparent case of marital infidelity that turns out to be a wrenching illustration of the sorrowful legacies of World War I.” I recommend reading Winspear’s moving essay about her first visit to the battlefields of the Somme and Ypres, where her grandfather saw action in 1916.

For more about our visit to Verdun, site of one of the largest battles in World War I, please see Remembering World War I.  And for a list of my favorite war novels, check out 10 War Novels for Memorial Day. (I recently learned that the difference between Memorial Day and Veterans Day, in the United States is that Memorial Day honors men and women who have died while serving in the military, while Veterans Day honors all those who who have served their country.)