Several days ago, a reader left a comment on the “In My Stack” page of this blog, urging me to read A Little Life, by Hanya Yanagihara. I was a little confused, since I read that unforgettable book more than a year ago. Shouldn’t I have removed it from “In My Stack” and included it in “Read in 2015”? Then I looked at the books I’d listed on “In My Stack” and realized that I hadn’t updated the list in years. Oops! (And by the way, I still think A Little Life should have won the National Book Award and the Man Booker Prize.)

So I wiped the list clean and started a new list of books that are In My Stack, with the intention of updating it every season. It’s hard to face the fact that it’s just not possible to read every book that catches my eye.

The three “practical rules” for reading, according to Ralph Waldo Emerson, are:

Emerson’s third rule is easy for me to follow, but the first two pose problems. Whenever I read an “old” book, I feel like I’m missing out on all the exciting new books of the season. And although I read plenty of books that have received publicity, awards, and critical acclaim, I also like to find hidden gems that haven’t received the love they deserve. I do have to acknowledge that Emerson has a point. Books that stand the test of time are worth reading. So I’ve added Elena Ferrante’s My Brilliant Friend to my fall list, because so many people whose opinions I trust have recommended it.

Two books that I didn’t add to my list, because I read advance copies earlier this summer, but that I highly recommend adding to yours are Commonwealth by Ann Patchett (on sale September 13; full review to come) and A Gentleman in Moscow by Amor Towles (on sale September 6). Commonwealth is very good, although my favorite of Patchett’s novels remains State of Wonder.

A Gentleman in Moscow is absolutely wonderful — one of the rare books I read slowly towards the end, because I just didn’t want to finish. It’s a hard act to follow, and every book I’ve read since has seemed vaguely second-rate in comparison. The “gentleman’ of the title is Count Alexander Ilyich Rostov, a Russian aristocrat born in 1889, who is sentenced  by a Bolshevik tribunal to lifelong house arrest in Moscow’s Metropol Hotel. The Count’s life is spared, unlike so many others of his class, because a poem he wrote struck the revolutionaries as sympathetic to their cause.

In a Publishers Weekly interview, Amor Towles says: “As awful as the crimes of Stalinism were, the vast majority of the Russian population was trying to survive, to love, to have a sense of purpose.” The Count — whose life before the Revolution was spent, in his words,”dining, discussing. Reading, reflecting. The usual rigmarole”, and who is accused by the tribunal of being “a man so obviously without purpose” — is able to live a purposeful, and even sometimes joyful, life as a prisoner at the Metropol.

A Gentleman in Moscow contains all the elements that make me fall in love with a book: a beautifully constructed story connected to historical events, an appealing and multidimensional protagonist, and a sharp and engaging writing style that inspired me to underline dozens of passages. Frequently, Towles addresses the reader directly:

Popular wisdom tells us that when the reel of our concerns interferes with our ability to fall asleep, the best remedy is the counting of sheep in a meadow. But preferring to have his lamb encrusted with herbs and served with a red wine reduction, the Count chose a different methodology altogether.

I’ll leave it to you to find out what his methodology was. If you’ve read Rules of Civility, you already know what a smart and entertaining writer Towles is — perfect for page-turners and page-huggers alike. A Gentleman in Moscow will certainly be on my list of favorites at the end of the year.

What will I read next? The following books are “on deck”, but that could change any time. 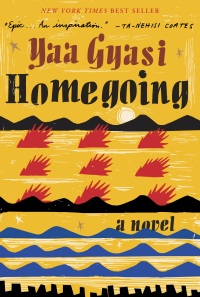 Homegoing by Yaa Gyasi (available now)
Homegoing, which has drawn raves from my coworkers, covers 300 years of African and American history, beginning with two sisters from Ghana, one who is sold into slavery and one who marries a British slave trader.

Shelter by Jung Yun (available now)
I need a good page-turner in the mix, and several bloggers who often share my tastes loved this book, which is rooted in the 2008 housing crisis.

The Sympathizer by Viet Thanh Nyugen (available now)
A must-read — it won the 2016 Pulitzer Prize for fiction.

Mischling  by Affinity Konar (September 6)
This debut novel, about identical twins at Auschwitz, has been receiving a lot of buzz (including a blurb by Anthony Doerr), and I can never read enough about World War II.

Nutshell by Ian McEwan (September 13)
McEwan is one of my favorite authors, and his new book sounds weird but interesting: it’s a murder mystery, inspired by Hamlet, told by an unborn child.

The Bookshop on the Corner by Jenny Colgan (September 20)
I can never resist a book about a bibliophile, and this one packs a double punch: the main character is a librarian who becomes a bookseller.

Today Will Be Different by Maria Semple (October 4)
I loved Where’d You Go, Bernadette and can’t wait to read Semple’s new book.

Let me know what you think I should add to (or subtract from!) my fall list.

5 thoughts on “What Would Emerson Read This Fall?”