I have seen tempests, when the scolding winds
Have rived the knotty oaks, and I have seen
The ambitious ocean swell and rage and foam,
To be exalted with the threatening clouds . . .
William Shakespeare, Julius Caesar

Along with millions of others in the southeastern United States, my mother was told to evacuate her home as Hurricane Matthew approached. Once I found she was safely in a motel 150 miles inland, I had one important question for her: did she have enough reading material? She assured me she did, and then told me she couldn’t wait to get back to The Woman in Cabin 10, by Ruth Ware. I guess that when faced with a hurricane, some people escape with psychological thrillers. Others might want to read about catastrophic storms. Here are ten books featuring hurricanes — both fiction and nonfiction — to pick up when you’ve watched enough swaying palm trees and crashing waves on the Weather Channel. None of these is a new book, but they’re all worth your time if you haven’t read them.

Time of Wonder by Robert McCloskey
I didn’t appreci 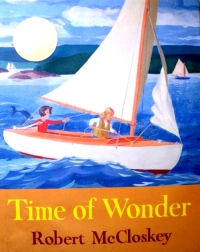 ate this lovely, poetic book as a child — like my own children, I much preferred Make Way for Ducklings and Blueberries for Sal — but now it’s my favorite McCloskey book. (And Robert McCloskey, along with E.B. White, is my favorite children’s author.)

The Perfect Storm: A True Story of Men Against the Sea by Sebastian Junger
Actually, The Perfect Storm isn’t about a hurricane — it’s about a real-life tempest caused by the confluence of three storm systems. Even if you’ve seen the movie, the book is well worth reading. It’s great narrative nonfiction, combining science with human drama.

Isaac’s Storm: A Man, a Time, and the Deadliest Hurricane in History by Erik Larson
Isaac Cline, chief of the United States Weather Bureau’s station in Galveston, Texas, failed to anticipate the deadly strength of a hurricane that barreled through the Gulf of Mexico, killing an estimated 8,000 people — the largest loss of life in a weather-related disaster in U.S. history. According to the New York Times, Larson “weaves together the terror and stoicism of ships’ captains, housewives, children and forecasters, infusing their tales with palpable tension. Few historical reconstructions sustain such drama.”

Shutter Island by Dennis Lehane
On a small island off the coast of Massachusetts, a murderer has escaped from a hospital for the criminally insane. Federal marshals search for the dangerous patient as a hurricane  bears down on the island. The story is complicated, filled with twists and turns that I defy you to predict.

Zeitoun by Dave Eggers
When I read Eggers’s account of a New Orleans family devastated by Hurricane Katrina, I thought it was his best book so far. The New York Times reviewer said: “My guess is, 50 years from now, when people want to know what happened to this once-great city during a shameful episode of our history, they will still be talking about a family named Zeitoun.”

Five Days at Memorial: Life and Death in a Storm-Ravaged Hospital by Sheri Fink
The author is a physician and Pulitzer Prize-winning journalist who’s written a gripping account of the life-and-death decisions medical staff at Memorial Medical Center in New Orleans were forced to make during Hurricane Katrina

Salvage the Bones by Jesmyn Ward
The 2011 National Book Award winner for fiction, set in Mississippi just before and during Hurricane Katrina and loosely based on the author’s own experiences, has “the aura of a classic”, according to Ron Charles of the Washington Post.

Last Train to Paradise: Henry Flagler and the Rise and Fall of the Spectacular Railroad That Crossed an Ocean by Les Standiford
Flagler, one of the founders of Standard Oil and the visionary who developed Florida as a vacation destination, built an engineering marvel: the Key West Railroad, crossing 150 miles of open sea. It was destroyed in the Labor Day Hurricane of 1935. Standiford, who’s also a novelist, has written a fascinating chronicle of a man, his accomplishments, and his era.

A High Wind in Jamaica by Richard Hughes
This is one of those neglected classics that deserves to be rediscovered. Written in 1929, and still in print, it’s the story of a group of children whose homes are destroyed in a Caribbean hurricane. When the children are sent to England, pirates seize their ship. It sounds like an adventure story, but it’s more of a psychological drama. In an NPR segment, Andrew Sean Greer said, “To say A High Wind in Jamaica is a novel about children who are abducted by pirates is to make it seem like a children’s book. But that’s completely wrong; its theme is actually how heartless children are.”

The wind came back with triple fury, and put out the light for the last time. They sat in company with the others in other shanties, their eyes straining against crude walls and their souls asking if He meant to measure their puny might against His. They seemed to be staring at the dark, but their eyes were watching God.