The selection process for each of the prizes is different. For the National Book Awards, publishers submit nominations to the National Book Foundation, paying an entry fee for each book. There are four categories — Fiction, Nonfiction, Poetry, and Young People’s Literature — and each category has five judges. The judges receive the books by July 1, announce a longlist in September, choose finalists in October, and present the awards at a ceremony in November. According to the National Book Foundation’s website, “Each panel reads all of the books submitted in their category over the course of the summer. This number typically ranges from 150 titles (Poetry) to upwards of 500 titles (Nonfiction).” This year, publishers submitted 394 titles for the Fiction prize.

Wow — that’s a lot of summer reading. It seems like the Poetry judges get off easy! The judges are authors, booksellers, librarians, and critics. This year’s Fiction judges are authors Alexander Chee, Dave Eggers, Karolina Waclawiak, and Jacqueline Woodson (chair), and bookseller Annie Philbrick. Last week, they chose ten novels that include works by established authors and past winners (Manhattan Beach by 2001 finalist Jennifer Egan, to be published October 3, and Sing, Unburied, Sing by 2011 winner Jesmyn Ward) as well as by debut authors (The Leavers by Lisa Ko, A Kind of Freedom by Margaret Wilkerson Sexton, Barren Island by Carol Zoref).

According to Bustle (an online women’s magazine that covers the literary world, among other things), “These are the best of the best, book nerds, so get ready to read them all.” But are they really? I’m not actually qualified to say — I’ve only read two of the ten books,

The Leavers and Pachinko (by Min Jin Lee) — but it’s hard to believe that those two novels are “the best of the best.” I enjoyed them both, but do they deserve to be National Book Award nominees?

Pachinko is the engrossing story of a Korean family, starting in in Japanese-occupied Korea in the beginning of the twentieth century and ending in Japan in the 1980s. It’s the sort of multigenerational saga that I adore, with the added benefit of covering unfamiliar territory: the experiences of ethnic minorities in Japan, and the culture of the pachinko parlor. Pachinko grabbed me from the beginning and wouldn’t let me go. However . . . I didn’t love the writing style. I was frequently distracted by oddly structured or ungrammatical sentences.

The Leavers, about a Chinese immigrant woman and the son she abandons, also addresses cultural differences. It’s a worthwhile and enjoyable novel — but is it better than Little Fires Everywhere by Celeste Ng, or Everybody’s Son by Thrity Umrigar? Those excellent novels also concern themselves with adoption, race, and class. Actually, so does ‘Round Midnight by Laura McBride, which will definitely make my list of favorite novels at the end of 2017. McBride brilliantly weaves together the stories of several characters with Las Vegas as the backdrop. The writing is gorgeous and the story is perfectly paced and constructed, with surprises at every turn. 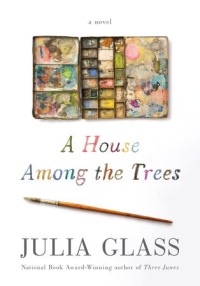 Julia Glass’s A House Among the Trees is another of my favorites that didn’t make this year’s National Book Award longlist. Inspired by the life and career of Maurice Sendak, this compassionate and insightful novel explores art, truth-telling, and loyalty, while telling a well-plotted story. Glass won the National Book Award for her debut novel, Three Junes, in 2002. surprising the literary community. According to an article in New York magazine titled “Cinderella Story,”:

Jaws dropped when unknown author Julia Glass beat a field crowded with literary luminaries to win the National Book Award . . . She was selected over such best-selling competition as Ann Packer (The Dive From Clausen’s Pier) and Alice Sebold (The Lovely Bones), and such hip lit boys as Jonathan Safran Foer (Everything Is Illuminated), Mark Costello (Big If), and Adam Haslett (You Are Not a Stranger Here).

Ann Packer, Jonathan Safran Foer, and Adam Haslett have had successful careers since 2002, but Mark Costello hasn’t published another novel and Alice Sebold has only published one (The Almost Moon) and it was pretty awful. Julia Glass, on the other hand, has published five more very good books.

Here’s the 2017 longlist for the National Book Award in Fiction — cast your vote, and we’ll see what happens in November. And if you’ve read any of those, I’d love to know what you think.

Dark at the Crossing by Elliot Ackerman
The King Is Always Above the People: Stories by Daniel Alarçon
Miss Burma by Charmaine Craig
Manhattan Beach by Jennifer Egan
The Leavers by Lisa Ko
Pachinko by Min Jin Lee
Her Body and Other Parties: Stories by Carmen Maria Machado
A Kind of Freedom by Margaret Wilkerson Sexton
Sing, Unburied, Sing by Jesymn Ward
Barren Island by Carol Zoref