I’m not really a book reviewer; I’m a book recommender. If I’m reading I book I don’t like, I have no problem putting that book down and moving on to the next one in my stack.  There are far too many

wonderful books in the world to bother with those that don’t capture my attention. That’s why I wouldn’t want to be a critic. People who agree to review books end up having to plow through a certain number of books they don’t enjoy — and then, if they’re honest, enumerate what they see as the failings of those books. I prefer to ignore the books that aren’t to my taste and to spread the good word about the ones that are. Maybe that attitude comes from 15 years of bookselling? When someone comes in the store and asks for a recommendation, I don’t point out the books that the customer wouldn’t like! If I’m asked point blank what I think of a book, and it’s one I disliked, I usually say, “It wasn’t my cup of tea”. That response covers a lot of territory. . . . although I’m always happy to expand on it.

Apparently, there is a controversy in the world of book reviewing about the value of negative book reviews. The well-regarded critic Laura Miller addressed this issue in an article for the online magazine Salon entitled “The Case for Positive Book Reviews”, stating “Critics who have a choice generally prefer to call attention to books they find praiseworthy”.

I trained myself to be unafraid of critics, and I’ve held them in high contempt since my earliest days as a writer because their work seems pinched and sullen and paramecium-souled . .  No writer has suffered over morning coffee because of the savagery of my review of his or her latest book, and no one ever will.

Although Bruni finds Conroy to be self-righteous in his refusal to criticize other writers (especially, Bruni notes, when his sensitivity doesn’t seem to extend to the Conroy family members who are used as material in his books), I appreciate Conroy’s position. Jacob Silverman, a columnist and book reviewer, does not.  In an article in Salon,  “Against Enthusiasm: The Epidemic of Niceness in Online Book Culture”, Silverman argues that there is a place for critical voices and negative reviews, saying “reviewers shouldn’t be recommendation machines” — that they should all “think more and enthuse less”. I appreciate his position as well — but I would rather keep my negative thoughts to myself.

I certainly respect the work that book critics do, and I am an enthusiastic reader of book reviews. Every Sunday, the book review section is the first one I pull out of the paper. I know I could read it earlier, when it arrives in the mail at the store, or online, but I like the ritual of reading it on Sundays. During the week, I read other book reviews online, in magazines, and in newspapers, but there is something special about the Sunday New York Times Book Review. I have a love-hate relationship with the Book Review — I’m mystified, and frequently annoyed, by the editors’ choices of books they deem worthy of review. But when I read a review of a book that I thought was terrific and find that the Times thought it was terrific too, I feel validated as a reader. 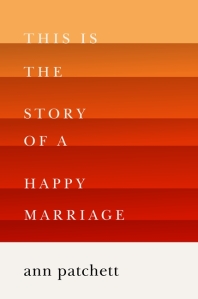 This Is the Story of a Happy Marriage by Ann Patchett reviewed by Maureen Corrigan/NPR www.npr.org/2013/11/13/244996958/a-marriage-a-divorce-a-dying-dog-and-essays-done-right

With or Without You by Domenica Ruta reviewed by Margaux Fragoso/New York Times www.nytimes.com/2013/03/24/books/review/with-or-without-you-by-domenica-ruta.html?pagewanted=2&_r=0