I recently met Renee Rosen at a Palatine Public Library event called Writing the Past– a panel discussion with three historical novelists. Renee and two other Chicago-area writers (Charles Finch, author of the Charles Lenox Victorian mystery series, and Melanie Benjamin, author of The Aviator’s Wife, Mrs. Tom Thumb, and Alice I Have Been) talked about the challenges and rewards of writing historical fiction. I’d just finished reading Dollface and was especially interested in Renee’s perspective on historical fiction. 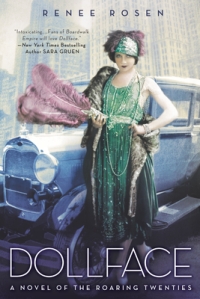 Several years ago, when Renee published her first novel (Every Crooked Pot, a contemporary novel), I recommended it again and again to both teenagers and adults. Renee’s portrayal of the relationship between a young girl with a disfiguring birthmark and her complicated father has remained one of my favorite coming of age stories. At first, I was surprised that the same Renee Rosen wrote both Every Crooked Pot and Dollface. But both books are about young women who feel like outsiders, struggling to belong and to find out who they are. Vera Abramowitz (a.k.a. “Dollface”), the title character and narrator,  just happens to be a gun moll.

There are few local writers who are more determined than Rosen. Her first, the novel Every Crooked Pot, was published in 2007, and she has spent the intervening years immersing herself in local history and polishing her style. These have been years well spent and excitingly realized in Dollface.

In the panel discussion, Renee mentioned that her original manuscript focused on male gangsters of Prohibition-era Chicago. In a post on her blog (“The Original Bad Boys”), Renee points out that these deadly criminals were very young men:

When you think of bad boys, they didn’t get any “badder” than Al Capone and Hymie Weiss.  In fact, Hymie Weiss was so bad that even Capone was scared of him.  And yet, in reality these original bad boys were indeed really just a bunch of boys.  During the Roaring ‘20s, the average age of a gangster was probably twenty-five and most of them were gunned down before their thirtieth birthdays.

Everyone knows that Prohibition was a colossal flop that did more to accelerate the consumption of alcohol than curb it. But it was also a breeding ground of opportunity for young street thugs, safe crackers and petty thieves. Practically overnight these kids went from scuffed up boots and soft caps to doubled-breasted suits and fedoras. They suddenly found themselves with money, power and broads. Girls everywhere chucked their corsets, defiantly bobbed their hair and flocked to these dashing young men who were just as forbidden as the hooch they were bootlegging.

Renee followed valuable advice from an editor to “move the men to the sidelines and give your women their due”.  We’re all familiar with Al Capone and his contemporaries, but the story told from the point of view of the female characters is fresh and imaginative.  Vera wrestles with the morality of loving a gangster:

I looked at the others and wondered how they could live with it — knowing what their men had done. I thought I’d found a way to justify it. I told myself that Shep was different from other gangsters, that he would never hurt anyone unless it was in self-defense, that underneath it all, he was a kindhearted, loving man. But what was I supposed to tell myself now that he’d been arrested and was out hunting Capone?

After listening to the panel discussion, I had many more questions for Renee — here’s the Q and A.

I loved your debut novel, Every Crooked Pot. (I’m always on the lookout for adult novels that appeal to teenagers — I’m not a fan of the “YA” genre.) Your second novel, Dollface, is historical fiction and clearly a departure from your first novel. What inspired you to move into historical fiction?

I actually started working on Dollface before Every Crooked Pot was published. I always loved history, especially the 1920s. I was drawn to that era even before Boardwalk Empire and the remake of The Great Gatsby came on the scene. I figured if I was that interested in this time period, maybe others would be, too.

For you, what is the line between fiction and fact? How much liberty do you think a writer of historical fiction can take with the facts? Is Vera Abramowitz based on a real person?

Great question. I’ve talked to other authors about this very thing and I admit that it is something I wrestle with. In Dollface I really tried to be as historically accurate as possible and spent a lot of time on my author’s note in the back to point out wherever I deviated from a timeline or a historical fact. I also tried to indicate what really happened because fact is definitely stranger than fiction, which is one of the great joys of conducting research.

As to how much liberty I take depends in part on how much information is available. For example, in my next book, What The Lady Wants, there was very little written about Marshall Field and Delia Canton’s personal lives so I’ve had to fill in the blanks. However, when I do that, I’m very conscious of basing it on other information that I’ve uncovered.

And lastly, Vera, the main character in Dollface is purely fictional, but again, I tried to make her true to the time.

The usual suspects instantly come to mind: Jhumpa Lahiri, Michael Chabon, Michael Cunningham, Donna Tartt. And yes, I do read historical fiction, though I can see why some would shy away from it. When I started researching Dollface there weren’t a lot of novels based in the 1920s so bleeding fact with fiction wasn’t really an issue. I’m finding many more novels set in my new time period from 1870s – 1900s and I’m loving it. I personally love getting a history lesson in while I’m reading.

If you had lived during the 1920s, what sort of life do you imagine you would have led?

I’m certain that I would not have had half the excitement that Vera has. And that’s a good thing! But knowing me, I’m sure I would have gone to speakeasies and I’m probably just enough of a rebel that I would have bobbed my hair and worn lip rouge. Probably would have flashed a kneecap or two as well!

How long did it take you to write Dollface — and how much of that was spent on research?

I worked on Dollface for about 10 years and the research was ongoing. I found that as the story evolved, I needed to learn more about a particular aspect of that era. I spent a lot of time meeting with people, everyone from Al Capone’s great niece to local historians as well as digging up old newspaper clips from the 1920s. It was really thrilling. I loved every minute of it!

As I’m sure you discovered with the publication of your first book, a whole new phase of a writer’s job begins when the book is published. How do you feel about that? Do you enjoy promoting the book, which involves networking and public speaking?

I’m actually loving it, mostly because I love the material so much. The gangsters and the Roaring Twenties were just fascinating so it’s very easy for me to talk about. I also have a background in advertising and marketing so for me, promotion is second nature. I know a lot of authors struggle with this and for me the most challenging aspect is finding the time to do it all and still continue working on the next book. Because there’s always a next book in the works!

The characters in Dollface are vivid and three-dimensional. Do you identify with any particular character — or with more than one?

Another really terrific question! I definitely didn’t base any of the characters on myself but I can relate to aspects of their personalities. For example, given her background, I can appreciate why Vera is seeking security and a more glamorous life. I also can understand Evelyn’s insecurities and I feel for her when she tolerates Izzy’s abuse. I loved Shep’s diplomacy as much as Basha’s brashness. And something all the characters do is justify and rationalize their lot in life. I think many of us can relate to that, even if we don’t approve of their choices.

What are your favorite books set in Chicago (besides Dollface!)? (Mine would have to be The Devil in the White City by Erik Larsen . . . I also loved Crossing California by Adam Langer.)

I’m with you on The Devil in the White City. I’d also add another non-fiction book, Sin in the Second City by Karen Abbott.  I adore Sister Carrie and The Jungle and for a fascinating historical overview of the city, I don’t think you can beat City of the Century.

Do you belong to a writers’ group? Do you see yourself as part of the literary community in Chicago and how would you characterize that community?

I do have a critique partner but I’m not currently part of a writer’s group. However, I would say that I’m fairly involved in the Chicago literary community, which is vibrant and very much alive. There’s an ever-expanding group of folks here comprised of writers, booksellers, reps and agents that meet once every other month for Publishing Cocktails that Keir Graff and Javier Ramirez started up. It’s always at a different location—sometimes we’ll do a cash mob at a bookstore and then move on to a local watering hole, other times, we’ll do a book swap. It’s always great fun.

Something else that has kind of taken on a life of its own is our All-You-Can-Eat-Sushi Lunches. And I know, no one should look for a bargain when it comes to sushi, but we’ve found a great little place (best kept secret in Chicago) and once a month we meet and eat and drink and talk for hours about books and writing and reading. It’s our version of the Algonquin Round Table.

What are your favorite places to go in Chicago — for example, any special parks? museums? restaurants?

I do adore the Chicago History Museum and the Art Institute. I’m also fortunate enough to have the lakefront within walking distance from my home and there’s nothing better on a beautiful day. Another great thing about Chicago are all the wonderful restaurants—new ones popping up and old favorites you can always count on.

Wow, that could be a thesis! I’m sure there are many people more qualified than I am to answer this, but I’ll try. Sadly, there are still a lot of parallels in terms of loyalties, the oath of silence, territories, bloodshed, etc. But, I will say that in the Twenties there were far fewer innocent people and children who became victims of gang violence. I also think that the gangsters of the Twenties saw themselves as businessmen first and foremost. They were much more likely to mingle and do business with other legitimate, established businessmen and even celebrities. Some gangsters, like Capone, even became a celebrity of sorts in his own right.