All you need is love. But a little chocolate now and then doesn’t hurt.
Charles M. Schulz

I’ve never had strong feelings about Valentine’s Day. I always thought it was a nice little holiday, reminding people to take a little time to celebrate the loving relationships in their lives. Who doesn’t enjoy candy, heart-shaped cookies, flowers, special dinners, and cards (sweet, mushy, or funny . . . carefully chosen, or homemade)?

To my husband and I, Valentine’s Day is a Hallmark holiday: a fabricated, hyper-commercialized event designed for retailers to peddle their wares and restaurants to fill seats. I also feel that it pressures couples to conform to a saccharine social norm while deprecating singledom, and I’ve seen people both in and out of relationships struggle with living up to the romantic expectations conjured by this collective cultural fantasy . . .Valentine’s Day is a cute and fun celebration of love to some, but it is a searing reminder of rejection, loneliness, and unrequited affection for many others.

If Paiuk had done a little research, she’d have learned that Valentine’s Day is far from a “Hallmark holiday”. The modern holiday is rooted in both ancient Roman traditions and early Christian history, and has been celebrated as St. Valentine’s Day since the 5th century A.D. Americans have been exchanging handmade valentines since the 18th century, and the first commercial valentines became available in the mid-19th century when Esther Howland of Worcester, Massachusetts founded the New England Valentine Company.

Paiuk has come up with an alternative to making valentines out of construction paper, glitter, and lace doilies — she and her family will be making “gratitude bookmarks”. Bookmarks can’t possibly offend anyone, although I have to admit I’m one of those terrible people who usually ends up dog-earing the pages of my books.

If you’ve read this far, you’re probably wondering when I’m going to stop criticizing Cara Paiuk’s campaign for “change, one heart at a time”, and start talking about books. My original intention was to update the list of great love stories I posted three years ago, but I realized I didn’t have many love stories to add. Here are a few of my favorites from 2016 — I haven’t read anything in 2017 that could be described as a love story, although I am devouring The Passion of Dolssa by Julie Berry, a YA novel about friendship and religious belief that takes place in 13th century Provence.

Mothering Sunday by Graham Swift
Downton Abbey fans will love this book, which NPR says “is one of those deceptively spare tales (like The Sense of an Ending) that punch well above their weight.” Jane Fairchild, now a successful author in her nineties, was a housemaid to an upper-class British family after World War I — and was involved in an affair with one of the family’s wealthy neighbors. How can you resist a novel that opens with this sentence: “Once upon a time, before the boys were killed and when there were more horses than cars, before the male servants disappeared and they made do, at Upleigh and at Beechwood, with just a cook and a maid . . .”?

The Atomic Weight of Love by Elizabeth J. Church
Church’s debut novel was inspired by the lives of her parents and their contemporaries. Meridian (Meri), a young biology student at the University of Chicago, marries her much older professor, Alden, and gives up her own dreams of becoming an ornithologist when her husband is sent to Los Alamos to help develop the atomic bomb. This lovely novel of love, sacrifice, and societal change spans 30 years in Meri and Alden’s flawed marriage.

When in French: Love in a Second Language by Lauren Collins
Lauren Collins decides to learn French to deepen her relationship with her French husband and his family. Along the way, she gains insight into herself, her marriage, linguistics, and cultural differences. This is a charming memoir, but more than that, it’s an examination of how language defines who we are.

If I Forget You by Thomas Christopher Greene
The author of The Headmaster’s Wife, one of my favorites of 2014, is back with a story of lost love. Henry Gold and Margot Fuller fall in love as students at a small college in upstate New York, only to be separated by forces beyond their control. Many years later, they meet again on a New York street and begin the painful process of reconnecting.

An amazing number of books have the word “heart” in the title. According to Edelweiss (a website for booksellers and librarians that aggregates publishers’ catalogs), more than 3,000 books with the word “heart” in the title were published last year. These included such gems as Cold-Hearted Rake, Depraved Heart, and Montana Hearts: Her Weekend Wrangler, as well as dozens of books about heart-healthy diets and lifestyles and countless books about journeys into the “heart” of nearly any locale you could imagine. Edelweiss doesn’t include the gazillion self-published books now available, such as A Thug Stole My Heart and Cupid Has a Heart-On.

I recently enjoyed Jennifer Weiner’s collection of personal essays, Hungry Heart: Adventures in Life, Love, and Writing. Weiner has a big chip on her shoulder, so she would hate to hear me say that I don’t love her novels because they are “chick lit”. However, I really liked her book of essays, and found myself underlining passages and turning down pages.

Looking at my own bookshelves, I saw many favorites, old and new, that you might not think of as Valentine’s Day books, but that have earned a special place in my heart: 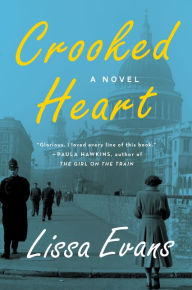 Crooked Heart by Lissa Evans
A precocious 10-year-old orphan is evacuated from London during the Blitz — and is placed with a couple of marginally successful con artists. Darkly humorous yet touching, this book is Roald Dahl for grownups. An American edition of one of the author’s earlier books, Their Finest (about wartime propaganda) comes out on February 14, probably because the movie version releases in April.

Heartburn by Nora Ephron
I’ve reread Heartburn several times, and it’s as funny and poignant today as it was when I first read it back in 1983. Nora Ephron exacted sweet revenge on her ex-husband, journalist Carl Bernstein, with this roman á clef about a pregnant cookbook writer and her philandering husband.

The Heart is a Lonely Hunter by Carson McCullers
Another book I’ve read multiple times, The Heart is a Lonely Hunter is a Southern Gothic masterpiece. Published in 1940 when Carson McCullers was only 23, the novel hasn’t exactly been forgotten (it was an Oprah’s Book Club selection in 2004), it’s been eclipsed by a similar book — To Kill a Mockingbird.

In the Heart of the Sea: The Tragedy of the Whaleship Essex by Nathaniel Philbrick
Winner of the National Book Award for nonfiction in 2000, Philbrick’s account of the survivors of the Essex shipwreck in 1820 is absolutely enthralling. I guess I like books about maritime disasters (and cannibalism) more than I like love stories.

Heart and Soul in the Kitchen by Jacques Pépin
I like to cook, but I love reading cookbooks. This one is particularly fun to read, packed with anecdotes, essays, and cooking tips. The recipes are geared towards home cooks, not professional chefs, and there are great illustrations. Another favorite cookbook is John Besh’s Cooking From the Heart and Susan Branch’s The Heart of the Home (which is unfortunately out of print but available used.)

Soldier’s Heart: Reading Literature Through Peace and War at West Point by Elizabeth D. Samet
Elizabeth Samet has been an English professor at West Point since 1997, responsible for directing the introductory literature class for 1,100 freshmen (or “plebes”). Part memoir, part meditation on literature and its place in both civilian and military society, the book is a fascinating glimpse at West Point life and a powerful argument for literature as a way to understand the world. 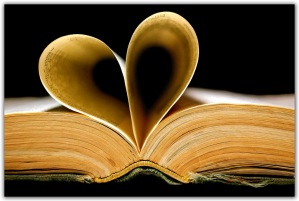 Old Heart by Peter Ferry
When Peter Ferry taught high school English in Lake Forest, Illinois, one of his students was Dave Eggers. Eggers has high praise for his former teacher’s second novel:

Old Heart manages to weave together an astonishing array of themes and layers – the perils and freedoms of old age, the complexity of family ties, the liberation of travel, and finally, Ferry presents and proves the bold and needed idea that it’s never too late to re-open the past to recast the present.

Happy Valentine’s Day from the bottom of my heart!

8 thoughts on “Happy Valentine’s Day from Books on the Table!”